Genetic Modification the Next Frontier in Reproductive Tourism 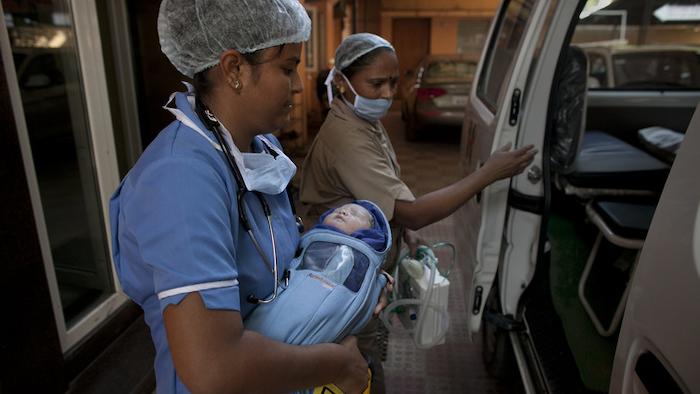 In this Nov. 3, 2015 photo, a newborn baby is transferred to an ambulance at the Akanksha Clinic, one of the most organized clinics in the surrogacy business, in Anand, India.
Allison Joyce/AP

The birth of the first baby born using a technique called mitochondrial replacement, which uses DNA from three people to “correct” an inherited genetic mutation, was announced in September 2016.

Mitochondrial replacement or donation allows women who carry mitochondrial diseases to avoid passing them on to their child. These diseases can range from mild to life-threatening. No therapies exist and only a few drugs are available to treat them.

There are no international rules regulating this technique. Just one country, the United Kingdom, explicitly regulates the procedure. It’s a similar situation with other assisted reproductive techniques. Some countries permit these techniques and others don’t.

Medical tourism for assisted reproductive technologies raises a host of legal and ethical questions. While new reproductive technologies, like mitochondrial replacement, promise to bring significant benefits, the absence of regulations means that some of these questions, including those related to safety and risks are unanswered, even as people are starting to use them.

How Does Mitochondrial Replacement Work?

We each inherit our mitochondria, which provide the energy that our cells need to function and the tiny fraction of DNA contained in it, only from our mothers. Some of that mitochondrial DNA might be defective, carrying mutations or errors that might lead to mitochondrial diseases.

The mother of the baby born using this technique carried one of these diseases. The disease, known as Leigh Syndrome, is a neurological disorder that typically leads to death during childhood. Before having this baby, the couple had two children who died as a result of the disease.

Mitochondrial replacement is done in a lab, as part of in vitro fertilization. It works by “substituting” the defective mitochondria of the mother’s egg with healthy mitochondria obtained from a donor. The child is genetically related to the mother, but has the donor’s mitochondrial DNA.

It involves three germ cells: an egg from the mother, an egg from a healthy donor and the sperm from the father. While the term “three-parent” child is often used in news stories, it is a highly controversial one.

To some, the tiny fraction of DNA contained in a mitochondria provided by a donor is not sufficient to make the donor a “second mother.” The U.K., the only country that has regulated the technique, takes this position. Ultimately, the DNA replaced is a tiny fraction of a person’s genes, and it is unrelated to the characteristics that we associate with genetic kinship.

There is some discussion as to whether mitochondrial replacement is a so-called “germ line modification,” a genetic modification that can be inherited. Many countries, including the U.K., have either banned or taken a serious stance on technologies that could alter germ cells and cause inherited changes that can affect future generations. But a great number of countries, including Japan and India, have ambiguous or unenforceable regulations about germline modification.

Because the mitochondrial modification is only heritable in girls, the U.S. National Academies of Science recently recommended that use of this technique be limited to male embryos, in which the change is not inheritable. The U.K. considered but then rejected this approach.

While the technique has been given the green light in the U.K., the nation’s Human Fertilisation and Embryology Authority is gathering more safety-related information before granting the first licenses for mitochondrial replacement to clinics.

Experts have predicted that once the authority starts granting authorization, people seeking mitochondrial replacement would go to the U.K.

At the moment, with no global standard dictating the use of mitochondrial replacement, couples (and experts willing to use these technologies) are going to countries where the procedure is allowed.

This has happened with other technologies such as embryo selection and commercial surrogacy, with patients traveling abroad to seek out assisted reproduction services or technologies that are either prohibited, unavailable, of lower quality or more expensive in their own countries.

The increasing trend of medical tourism has been followed by sporadic scandals and waves of tighter regulations in countries such as India, Nepal and Thailand, which have been leading destinations of couples seeking assisted reproduction services.

Intended parents and children born with the help of assisted reproduction outside of their home countries have faced problems related to family ties, citizenship and their relationship with donors – especially with the use of commercial surrogacy.

Mitochondrial replacement and new gene editing technologies add further questions related to the safety and long-term effects of these procedures.

Mitochondrial replacement and technologies such as gene-editing with the use of CRISPR-CAS9 that create germline modifications are relatively new. Many of the legal and ethical questions they raise have yet to be answered.

What if the children born as a result of these techniques suffer unknown adverse effects? And could these technologies affect the way in which we think about identity, kinship and family ties in general? One technique to replace mutated mitochondria involves the creation of embryos that will be later disposed. How should the use and disposal of embryos be regulated? What about the interests of the egg donors? Should they be paid?

Some of these problems could be avoided through a solid regulatory system in the U.S. and other countries. But as long as patients continue to seek medical treatments in “havens” for ethically dubious or risky procedures, many of these problems will persist.

Regulatory authorities around the world are debating how to better regulate these genetic modification technologies. Governments need to start considering not only the ethical and safety effects of their choices but also how these choices drive medical tourism.

This article was originally published on The Conversation. Read the original article here: http://theconversation.com/the-next-frontier-in-reproductive-tourism-genetic-modification-67132.