Can Trump Keep Promise to Save Carrier Jobs?

In May of 2016, Trump promised that, if he became President, the chance of keeping the Carrier jobs in Indiana would be “100%.”

As you may recall, when Donald Trump was running for president, he shone a huge spotlight on Carrier Corporation, the HVAC company that’s owned by the multinational conglomerate United Technologies Corp. While on the campaign trail, the issue that irked ‘the Donald’ was Carrier’s announcement that they’d be shifting more than 2,000 jobs from plants in Indiana to operations in Mexico.

At the time, Trump threatened Carrier with a 35 percent tariff on air conditioners that came back from Mexico to be sold in the United States, but the company was undeterred by the sharp rhetoric. Well, now that Trump is mere weeks away from sitting at the head of the table, he’s revisiting the Carrier issue, in an attempt to make good on some of his campaign promises around manufacturing job creation – for example, in May of 2016 Trump promised that, if he became President, the chance of keeping the Carrier jobs in Indiana would be “100%.”

But the Wall Street Journal is suggesting that President-elect Trump’s aggressive stance may be shifting as he Tweeted about making progress in his ongoing talks with Carrier. Rather than a steep tariff, the Journal indicates that Trump’s administration may bow to some demands – specifically United Technologies wishes for a tax overhaul that Mr. Trump and Republicans have promised to pursue early in his administration.

So will the scathing penalty actually morph into a nice little incentive for the multinational company? Maybe, but Senator Bernie Sanders has another idea that’s a bit more stick than carrot. Sanders says that Trump must make it clear that if United Technologies “wants to receive another defense contract from the taxpayers of this country, it must not move these plants to Mexico.” Sanders proposed bill would also tax companies that outsource jobs, and tax the compensation of executives whose companies send jobs overseas. 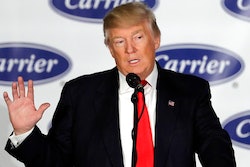