State offers $7 million of incentives to a company still planning to cut about a third of its some 1,600 jobs. 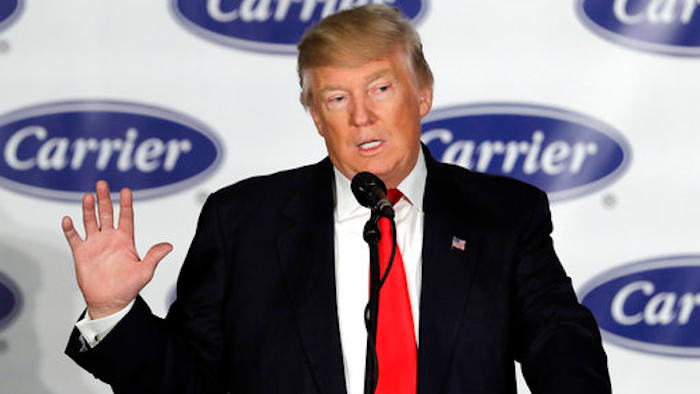 In this Dec. 1, 2016, file photo, President-elect Donald Trump speaks at the Carrier Corp. factory in Indianapolis. The $7 million deal to save jobs at the Carrier factory in Indianapolis is poised for approval by state officials nearly four months after President Donald Trump celebrated his role in the negotiations with a post-election visit to the plant.
AP Photo/Darron Cummings, File

INDIANAPOLIS (AP) — The deal brokered by President Donald Trump to stem job losses at a Carrier Corp. factory in Indianapolis is unusual for the state of Indiana as it offers $7 million of incentives to a company still planning to cut about a third of its some 1,600 jobs.

A state economic development board is scheduled to vote Tuesday on endorsing the package nearly four months after Trump celebrated his role in the negotiations with a visit to the plant, which makes furnaces.

Most of the scant details that Indiana officials have released came on a one-page handout distributed by then-Gov. Mike Pence's staff when he and Trump traveled to the Carrier factory on Dec. 1. Trump, who during the presidential campaign had often criticized Carrier's plans to shutter the factory and shift production to Mexico, declared that the company's reversal would be the first of many such decisions with him as president.

Many states offer tax breaks and training grants for companies to retain jobs, but that hasn't been the case in Indiana over the last 12 years, when Republicans have held the governor's office. During that time, the state has typically demanded companies receiving such economic development deals promise to create new jobs.

Carrier announced last February that it would close the Indianapolis factory and cut about 1,400 production jobs in a move expected to save $65 million annually. The deal with the state saves about 800 of those jobs, but about 550 of them are still being eliminated. Carrier also promises to keep 250 headquarters and engineering staff positions in Indianapolis that the company had said all along would stay in the state.

Indiana Secretary of Commerce Jim Schellinger said he wishes jobs weren't being eliminated at the factory, but is happy it is staying open.

"This was not a threat; they'd left," he said. "They were in the process of putting the finishing touches on a $52 million plant in Monterrey, Mexico."

Only 11 state incentive deals since 2005 have involved a fund for job retention, making up less than 0.5 percent of the 2,570 agreements during that time, according to Indiana Economic Development Corp. reports. Retention deals are smaller than many job creation packages, such as an $18 million offer last year to business software company Salesforce for adding up to 800 positions in Indianapolis.

The $7 million over a decade that Carrier will receive pales in comparison with the $57 billion in sales reported by parent company United Technologies for last year. Trump had leverage because United Technologies also owns Pratt & Whitney, which has billions in contracts to produce fighter jet engines for the U.S. military.

Schellinger acknowledged that more than state incentives were involved in Carrier's decision. The company previously had rebuffed negotiation attempts by Pence, who is now Trump's vice president.

"Then Donald Trump picks up the phone on Nov. 15 and makes a phone call and reminds the CEO of United Technologies that 10 percent of their revenues come from the federal government, which could all change on Jan. 21," Schellinger told The Associated Press. "Game, set, match."

Carrier, in a Nov. 30 statement, attributed its decision to the Trump administration's "commitment to support the business community and create an improved, more competitive U.S. business climate." The company said this past week that the state incentives were an important consideration, but didn't respond to questions about the possible loss of federal contracts.

Indiana University business professor Mohan Tatikonda, who has studied the Indianapolis Carrier plant, said United Technologies' priority is having a good relationship with the Trump administration as tax and regulation changes are considered.

"Potentially being at the table to influence trade policy and so forth — that is far more important than the $7 million that the state is offering," he said.

"There's no policy takeaway here," LeRoy said. "This was a high-profile episode that Trump chanced upon while on the campaign trail and chose to revisit, as far as I can tell."

Eighty-seven percent of the panelists have identified supply chain bottlenecks as a major factor in the acceleration of prices.
Dec 6th, 2021

Manufacturing can be an exemplar of sustainability by adopting Industry 4.0 towards decarbonization and for building a circular economy.
Dec 3rd, 2021
Follow Us
Most Recent