Urban water use accounts for a relatively small percentage of California's overall water use when compared to agriculture. 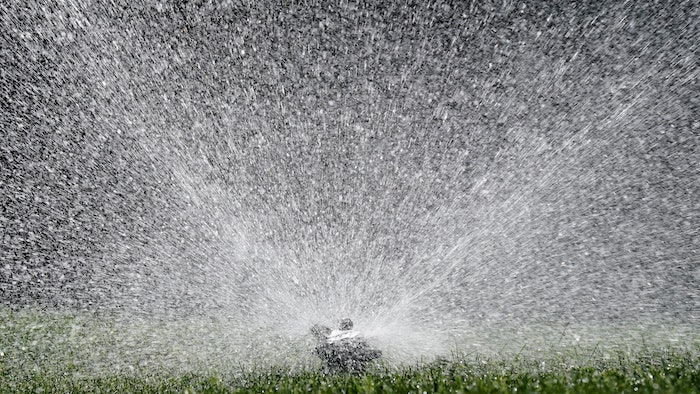 SACRAMENTO, Calif. (AP) — California's water use jumped dramatically in March, state officials said Tuesday, as one of the driest stretches on record prompted a wave of homeowners to start watering their lawns earlier than usual in defiance of Gov. Gavin Newsom's pleas for conservation amid a severe drought.

Newsom last summer asked residents to voluntarily cut water use by 15% compared to 2020 as climate change intensified a drought that threatened to drain the state's reservoirs to dangerously low levels. Water conservation increased gradually through December, aided by some intense fall and early winter storms that reduced water demand.

But the first three months of 2022 have been the driest on record. Californians averaged 77 gallons (291.48 liters) per person per day in March, an 18.9% increase from March 2020. It's the most water Californians have used in March since the middle of the previous drought in 2015. Statewide, water consumption is up just 3.7% since July compared to 2020, woefully short of Newsom's 15% goal

Newsom responded on Tuesday by pledging to spend $100 million on a statewide advertising campaign to encourage water conservation. The campaign will include traditional radio and television spots while also paying people with large followings on social media to urge others to save water. He also promised to spend an $211 million to conserve more water in state government buildings by replacing plumbing fixtures and irrigation controls.

“Conservation actions are most impactful when they account for the diversity of conditions and supply needs around the state,” Newsom's office said in a statement. “We are hopeful these actions will significantly contribute to the state’s overall water reduction goals as outdoor watering is one of the biggest single users of water.”

In Los Angeles — the second most populous city in the U.S. — Mayor Eric Garcetti said residents and businesses would have to reduce outdoor landscape watering from three days per week to two. Irrigation makes up 35% of the city’s water use.

Urban water use accounts for a relatively small percentage of California's overall water use when compared to agriculture. But the state's farmers have been suffering, too, as state and federal officials have reduced water allocations to zero in some places.

Demand for non-agriculture water is typically low in March, which comes near the end of the state’s rainy season. It can sometimes rain so much in March that it makes up for the rest of the year, a phenomenon officials have dubbed the “March miracle.”

But California got just 1 inch (2.54 centimeters) of precipitation in March while the temperatures were 3 degrees warmer than usual, further increasing water demand.

A series of April storms have improved things slightly since March. Still, most of the state's reservoirs are well below their historic averages. The reservoirs depend on melted snow from the Sierra Nevada to replenish them for the dry summer months. But the statewide snowpack was at just 27% of its historic average as of April 1.

“This is what we have. This is what we're going to get. We can't expect anything significant past this date,” said Jeanine Jones, manager for interstate resources with the California Department of Water Resources.

State officials said 20% of the wells they monitor are reporting all-time low water levels, while nearly half of them have less than 10% of their historic averages. In some cases, the state is helping to haul water to small communities that don't have access to it. State officials said they were assisting 687 households through a small community drought relief program.

Some larger communities were also in danger. Lindsay, a city of about 13,000 people in California's Central Valley, was projected to run out of water on July 1. Federal officials approved an additional allocation for the city, which they now say will have enough water to last through February — provided they continue to conserve.