Factories in China’s busiest manufacturing provinces have been ordered to suspend production for up to a week. 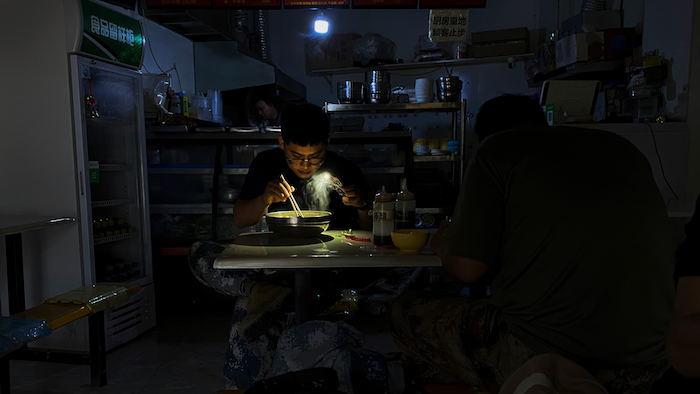 A man uses his smartphone flashlight to light up his bowl of noodles as he eats his breakfast at a restaurant during a blackout in Shenyang in northeastern China's Liaoning Province, Wednesday, Sept. 29, 2021. People ate breakfast by flashlight and shopkeepers used portable generators Wednesday as power cuts imposed to meet official conservation goals disrupted manufacturing and daily life.
AP Photo/Olivia Zhang

SHENYANG, China (AP) — People in northeastern China ate breakfast by the light of smartphones and shopkeepers turned on generators as much of the country enforced power cuts Wednesday to meet official conservation targets and ease shortages in some areas.

In Shenyang, the northeast's most populous city, restaurant owner Li Yufeng used a battery from an electric bicycle to run a pot for noodles after seeing a notice power would be switched off at 7:30 a.m. Li said he started work two hours early, at 6 a.m., to prepare chicken, sauces and other dishes.

“There are some impacts, but not a big impact,” Li said as customers ate by smartphone lights.

Factories in China’s busiest manufacturing provinces have been ordered to suspend production for up to a week, prompting concern global supplies of smartphones and other goods might be disrupted. Now, urban neighborhoods are being blacked out, triggering pleas on social media for the government to solve the problem.

China’s power consumption is growing at almost double its usual rate, while the ruling Communist Party is trying to reduce energy intensity, or the amount used per unit of economic output.

The power cuts come as global leaders prepare to attend a U.N. environmental conference by video link on Oct. 12-13 in the southwestern city of Kunming. That increases pressure on President Xi Jinping’s government, as the meeting’s host, to show it is sticking to emissions and energy efficiency targets.

The cuts are “largely driven by energy consumption control measures, with power shortages affecting another few provinces,” Lara Dong of IHS Markit said in an email.

“This is in line with China’s decarbonization ambitions,” she said.

The Cabinet’s planning agency warned in August that 20 regions had exceeded energy use and pollution targets after manufacturing rebounded from the pandemic. The government has ambitious plans to make the economy cleaner and more energy-efficient, so failing to meet those targets can be a career-ending blunder.

The power cuts “could be more disruptive than previous shortages,” Bank of America said in a report. Due to shortages in some areas, it said, "a relaxation of the government’s energy consumption goals may not immediately alleviate the power crunch.”

China is one of the world’s biggest emitters of climate-changing industrial gases and consumes more energy per unit of economic output than developed countries. Given its huge population, on a per capita basis it ranks much lower.

China also is preparing for the Winter Olympics in the capital, Beijing, and the nearby city of Shijiazhuang in February, a period when it will want clear blue skies.

Officials in Jiangsu province, a manufacturing hub northwest of Shanghai, told state media some cities there have used up 90% of this year's quota for power use. The officials of the provincial planning agency were cited as saying individual city governments had to decide how to meet their targets.

The government of Guangdong province, China's biggest manufacturing center, has cited both official energy use limits and low water levels in hydropower reservoirs that provide a big share of its electricity.

In Liaoning province, where Shenyang is the capital, the government said in a statement Sunday that power demand hit a record high in the first eight months of the year. It said Liaoning has suffered shortages since then due to a decline in wind power and other sources.

The government of neighboring Jilin province blamed a shortage of coal. It said in a statement Monday its governor would visit miners in nearby Inner Mongolia to line up additional supplies.

Some advance warnings of power cuts to residents in Shenyang and other cities cited a need to ration power but didn't say why.

Li, the noodle restaurant owner, showed a reporter a notice circulated on social media that said power would be out in his neighborhood from 7:30 a.m. to 4:30 p.m.

Shopkeeper Yang Chang had a generator running on the sidewalk to keep freezers full of meat cold.

“As long as there is electricity we can sell things, unlike restaurants that need water,” said Yang. Yang didn’t know or care what the reason for the power outage was but said, “it’s understandable.”

“I was born in the ’90s. When I was little, electricity wasn’t stable,” said Yang. “Although we are having difficulties, the government will find a solution.”