Independent distribution trucks and their crews blocked the entrances to gas tank farms. 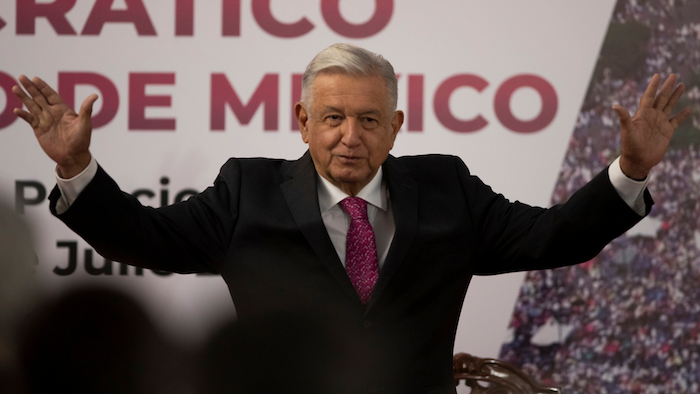 MEXICO CITY (AP) — Crews that distribute LP gas in Mexico’s capital went on strike Tuesday, just two days after the government imposed price controls on the fuel that most Mexicans use to cook and heat water.

Independent distribution trucks and their crews blocked the entrances to gas tank farms on the outskirts of Mexico City to protest maximum prices that they say will hurt their earnings.

Experts had warned that price controls announced Sunday would probably lead to shortages, because the largely private gas distributors may refuse to operate under government-imposed profit margins.

Photos posted by local media showed masked men smashing the windows of some small gas tank trucks to enforce the strike. Such tankers are used to refill large rooftop gas tanks in homes.

The Mexican Association of Gas Distributors said it “distances itself from the actions by groups of independents who work on commission, who do not hold distribution permits and who are blocking plants, preventing us from going out and working to supply homes and businesses that need gas.”

The association represents the owners of tank farms and some larger distribution chains that own fleets of trucks. The independents own or lease their own trucks, or run smaller, more antiquated operations delivering small portable LP cylinders to homes.

The association said it had warned the government about “the risks and impacts implicit” in imposing price controls.

Mexico’s anti-monopoly regulator criticized President Andrés Manuel López Obrador’s plan to set a maximum price for cooking and heating gas, and warned that “price regulation could have consequences unintended by the decree, like shortages of LP gas.”

Mexico imports much of its LP gas, and international prices have risen, leading to higher costs for Mexicans. López Obrador invoked emergency powers to decree a six-month price cap.

Experts said the proposed price cap hearkens back to decades past when Mexico’s state-owned oil company Pemex imported LP gas and sold it at fixed prices to distributors. Now, private companies import much of the gas, and won’t do so if they lose money on it.

“If the price controls reach a point where they (private firms) can’t cover the cost of the gas, they simply won’t deliver it and there will be shortages,” said Eduardo Prud’homme, a partner in the energy consulting and analysis firm Gadex. “Shortages will create a black market.”

If Pemex decided to try to serve as the importer and seller of last resort, that could create a classic problem of subsidies, with artificially cheap gas potentially being siphoned away to markets where it can be sold at market prices.

“Implementing this is going to be extremely complex,” Prud’homme said. “It is going to cost a lot of money and it isn’t going to solve the problem.”

The government is under pressure to do something.

One of the president’s key promises has been that basic fuel prices won’t increase above the rate of inflation, and the largely privatized market for cooking gas cylinders has made that unobtainable.

Mexico’s inflation rate is currently hovering around 6%. Cooking gas is used by 70% of Mexican households and home deliveries have almost doubled in price in some areas over the last year.

López Obrador said earlier this month he wants to create a government company to distribute cooking gas following the surge in LP gas prices. But part of Mexico’s energy reform almost a decade ago was intended to move away from fixed prices and state-owned industries, to create free competition in fuel markets.

The president contends private gas distribution companies have inflated their profit margins and he says a state-run delivery company could charge lower prices.

Gas Stations Running out of Fuel as 4th of July Nears