The numbers came despite lower production due to interruptions in the semiconductor supply chain. 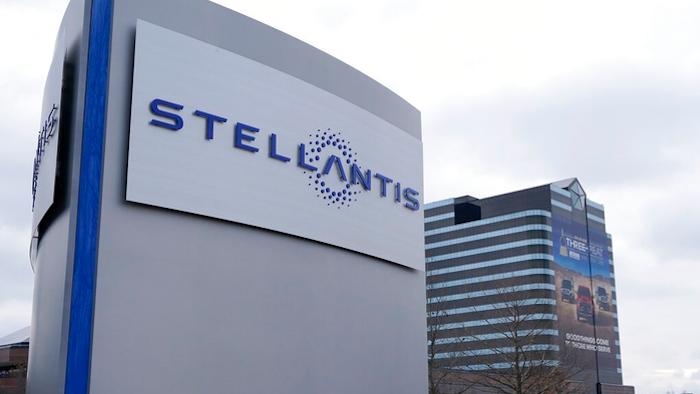 In this file photo taken on Jan. 19, 2021, the Stellantis sign is seen outside the Chrysler Technology Center, Tuesday, in Auburn Hills, Mich. Stellantis reported net profit of 5.9 billion euros ($7 billion) in the first half of 2021.
AP Photo/Carlos Osorio

MILAN (AP) — Automaker Stellantis said Tuesday it achieved faster-than-expected progress on synergies and record margins in its first six months as a combined company, despite suffering 700,000 units in lower production due to interruptions in the semiconductor supply chain.

The company — formed from French carmaker Peugeot PSA’s takeover of the Italian-American company Fiat Chrysler — reported net profit of 5.9 billion euros ($7 billion) in the first half of 2021, compared with a loss 813 million euros during the same period a year earlier, which was impacted by the coronavirus restrictions around the globe.

“We are very pleased with the speed with which the new team has begun to execute as one company, as Stellantis,’’ Chief Financial Officer Richard Palmer told reporters.

Semiconductor shortages accounted for 200,000 units of production losses in the first quarter and 500,000 in the second quarter. Semiconductors are used more than ever before in new vehicles with electronic features such as Bluetooth connectivity and driver assist, navigation and hybrid electric systems.

Stellantis achieved 1.3 billion euros in cost savings in the first half, mostly by sharing investments in new technologies and platforms, which Palmer said was a faster rate than initially forecast. It aims to achieve 80% of the targeted 5 billion in cost savings by 2024.

“These synergies allow us to continue to invest in the electrification strategy, which we talk about every day,” Palmer said. Stellantis, which lags competitors in rolling out electric vehicles, plans to launch 21 fully electric or plug-in gas electric hybrid vehicles over the next two years.

North American posted record profitability on global sales of Ram trucks and the strong launch of the Jeep Wrangler 4xe, which was the best-selling plug-in gas electric vehicle in the United States in the second quarter. Stellantis was the market leader in South America and second in Europe.

The results were presented on a pro-forma basis, taking into account the performance of each of the carmakers as separate entities during 2020.