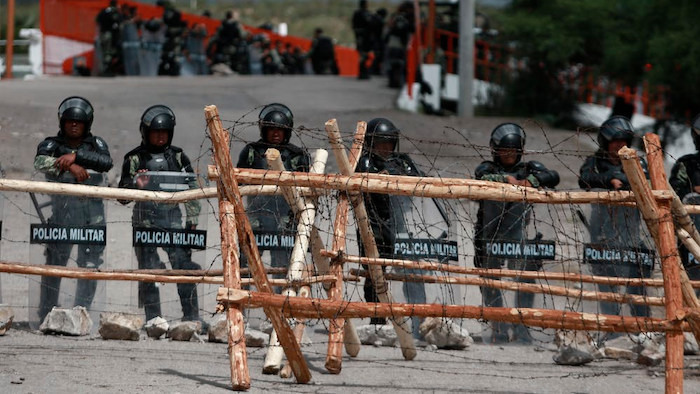 The United States and Mexico are tussling over their dwindling shared water supplies after years of unprecedented heat and insufficient rainfall.

A 1944 treaty between the U.S. and Mexico governs water relations between the two neighbors. The International Boundary and Water Commission it established to manage the 450,000-square-mile Colorado and Rio Grande basins has done so adroitly, according to our research.

That able management kept U.S.-Mexico water relations mostly conflict-free. But it masked some well-known underlying stresses: a population boom on both sides of the U.S.-Mexico border, climate change and aging waterworks.

The mostly semiarid U.S.-Mexico border region receives less than 18 inches of annual rainfall, with large areas getting under 12 inches. That’s less than half the average annual rainfall in the U.S., which is mainly temperate.

The 1940s, however, were a time of unusual water abundance on the treaty rivers. When American and Mexican engineers drafted the 1944 water treaty, they did not foresee today’s prolonged megadrought.

Nor did they anticipate the region’s rapid growth. Since 1940 the population of the 10 largest pairs of cities that straddle the U.S.-Mexico border has mushroomed nearly twentyfold, from 560,000 people to some 10 million today.

This growth is powered by a booming, water-dependent manufacturing industry in Mexico that exports products to U.S. markets. Irrigated agriculture, ranching and mining compete with growing cities and expanding industry for scarce water.

Today, there’s simply not enough of it to meet demand in the border areas governed by the 1944 treaty.

Three times since 1992 Mexico has fallen short of its five-year commitment to send 1.75 million acre-feet of water across the border to the U.S. Each acre-foot can supply a U.S. family of four for one year.

In the fall of 2020, crisis erupted in the Rio Grande Valley after years of rising tensions and sustained drought that endanger crops and livestock in both the U.S. and Mexico.

In September 2020, Texas Gov. Greg Abbott declared that “Mexico owes Texas a year’s worth of Rio Grande water.” The next month, workers in Mexico released water from a dammed portion of Mexico’s Río Conchos destined to flow across the border to partially repay Mexico’s 345,600-acre-foot water debt to the U.S.

Frustrated farmers and protesters in the Mexican state of Chihuahua clashed with Mexican soldiers sent to protect the workers. A 35-year-old farmer’s wife and mother of three was killed.

Mexico also agreed to transfer its stored water at Amistad Dam to the U.S., fulfilling its obligation just three days before its Oct. 25, 2020, deadline. That decision satisfied its water debt to the U.S. under the 1944 treaty but jeopardized the supply of more than a million Mexicans living downstream of Amistad Dam in the Mexican states of Coahuila and Tamaulipas.

The U.S. and Mexico pledged to revisit the treaty’s Rio Grande water rules in 2023.

The drought dilemma on the Colorado River is similarly dire. The water level at Lake Mead, a major reservoir for communities in the lower Colorado River Basin, has dropped nearly 70% over 20 years, threatening the water supply of Arizona, California and Nevada.

In 2017, the U.S. and Mexico signed a temporary “shortage-sharing solution.” That agreement, forged under the authority of the 1944 treaty, allowed Mexico to store part of its treaty water in U.S. reservoirs upstream.

Water shortages along the U.S.-Mexico border also threaten the natural environment. As water is channeled to farms and cities, rivers are deprived of the flow necessary to support habitats, fish populations and overall river health.

The 1944 water treaty was silent on conservation. For all its strengths, it simply allocates the water of the Rio Grande and Colorado rivers. It does not contemplate the environmental side of water use.

But the treaty is reasonably elastic, so its members can update it as conditions change. In recent years, conservation organizations and scientists have promoted the environmental and human benefits of restoration. New Colorado River agreements now recognize ecological restoration as part of treaty-based water management.

Environmental projects are underway in the lower Colorado River to help restore the river’s delta, emphasizing native vegetation like willows and cottonwoods. These trees provide habitat for such at-risk birds as the yellow-billed cuckoo and the Yuma clapper rail, and for numerous species that migrate along this desolate stretch of the Pacific Flyway.

Currently, no such environmental improvements are planned for the Rio Grande.

But other lessons learned on the Colorado are now being applied to the Rio Grande. Recently, Mexico and the U.S. created a permanent binational advisory body for the Rio Grande similar to the one established in 2010 to oversee the health and ecology of the Colorado.

Another recent agreement permits each country to monitor the other’s use of Rio Grande water using common diagnostics like Riverware, a dynamic modeling tool for monitoring water storage and flows. Mexico also has agreed to try to use water more efficiently, allowing more of it to flow to the U.S.

Incremental treaty modifications like these could palpably reduce the past year’s tensions and revitalize a landmark U.S.-Mexico treaty that’s buckling under the enormous strain of climate change.

This article is republished from The Conversation under a Creative Commons license. Read the original article here: https://theconversation.com/megadrought-along-border-strains-us-mexico-water-relations-160338.