Retiring UAW Leader on Tough Times Past & Ahead

And will the EV boom mean fewer union auto jobs. 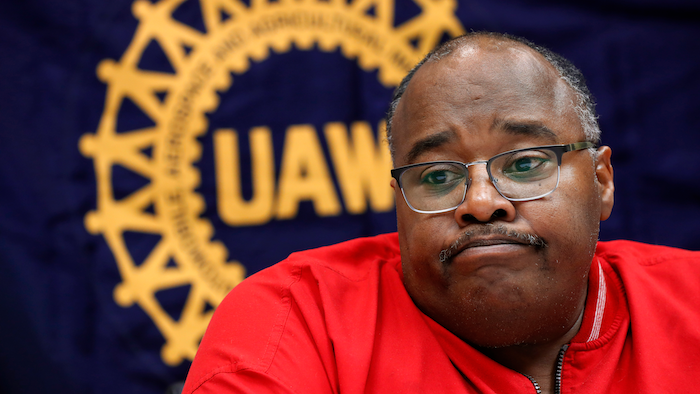 In this Nov. 6, 2019, file photo, United Auto Workers union President Rory Gamble answers questions in Southfield, Mich. When Gamble took over as president of the United Auto Workers in 2019, the union was embroiled in a federal corruption probe that had ensnared two of Gamble's predecessors. It won't get any easier for Gamble's successor, Ray Curry. He will preside over a union that faces monumental changes as the auto business navigates an epochal transition from internal combustion engines to battery-electric powered vehicles.
AP Photo/Paul Sancya, File

DETROIT (AP) — When Rory Gamble took over as president of the United Auto Workers in 2019, the union was embroiled in a federal corruption probe that had ensnared two of Gamble's predecessors. It had just endured a 40-day strike against General Motors. And then the viral pandemic erupted, forcing auto plants to halt production and idle its workers for weeks until safety precautions were adopted.

It won't get any easier for Gamble's successor, Ray Curry. He will preside over a union that faces monumental changes as the auto business navigates an epochal transition from internal combustion engines to battery-electric powered vehicles.

Yet Gamble, 65, insists he is leaving the UAW in solid shape, with, among other things, financial safeguards in place to help prevent corruption. He cautions, though, that it is critical for the union to organize battery and electric vehicle component factories and to secure decent wages for workers in the face of the automakers' efforts to reduce labor costs.

The Associated Press spoke with Gamble on Wednesday, his last day of work, about the future of the union. The interview was edited for clarity and length.

Q: YOU’RE LEAVING ABOUT A YEAR BEFORE THE END OF YOUR TERM. WHY NOW?

A: I’m very confident the UAW is in great hands. My replacement, Ray Curry, his abilities, his resumé — he’s got a lot of seat time and leadership underneath him. I think it’s an appropriate time for me to go. I’ve always had this belief that we should put stable, long-term leadership in the president’s chair. And I think that’s essential to how we approach agreements. So these companies are going to be dealing with this person for a long time.

Q: A COMING VOTE WOULD GIVE WORKERS THE POWER TO DIRECTLY ELECT UNION LEADERS, RATHER THAN PICKING DELEGATES TO A CONVENTION. YET YOU’RE AGAINST THIS. WHY?

A: A lot of them don’t understand all the ramifications. In contemporary times, our problem is anti-union-funded enterprises that spend a lot of money, put out a lot of disinformation to destroy unions. The delegate system allows us to make sure every local in our union has a voice. We have many sectors. One of our largest is auto, with active and retired members. Basically, that large majority vote could take up every spot. And smaller sectors like higher education, gaming, independent parts suppliers, health care — they could get swallowed up and not have representation on the board. It ensures we have women, we have minorities. You could see probably an all-male leadership team that doesn’t reflect the membership. One member, one vote has absolutely nothing to do with corruption and will not prevent corruption. Corruption begins in the heart. Strong financial controls and strong accurate oversight prevents corruption.

Q: THE UAW FACES PERHAPS THE BIGGEST CHALLENGE IN ITS HISTORY AS THE BUSINESS SHIFTS TO ELECTRIC VEHICLES. HOW IMPORTANT IS IT TO ORGANIZE BATTERY AND COMPONENT PLANTS?

A: It’s very important to the future of the union. But it’s really essential to the economic future of this country that we maintain good-paying auto manufacturing jobs with good wages, with great benefits. This country needs to bring critical manufacturing back. It takes less people, less components to build an electric car. We need to own our battery technology, or what’s happening with the computer chip shortage could also happen with battery sales. So it’s critical that we bring this manufacturing back home, give these jobs to Americans. And most importantly, they should have a right as American workers to organize. We don’t need another $12-, $15-an-hour wage structure for manufacturing. These electric vehicle jobs should be at the rate of the work that they are replacing. Or else we could be in trouble economically in this country.

Q: GM AND FORD ARE BUILDING BATTERY FACTORIES. GM HAS SAID THESE SHOULD BE COMPONENT PLANTS, WHERE IT PAYS $22.50 PER HOUR, RATHER THAN THE $31 AT ASSEMBLY OR ENGINE AND TRANSMISSION PLANTS. HOW WILL THE UAW HANDLE THIS?

A: Assembly work should mirror the work it's replacing. The component work should mirror the work it's replacing. I think the workers should have a right to raise their collective voices if they want to unionize. People have to remember, a lot of these companies that are being partnered with are foreign companies, and in their countries, unionization is embraced. It's only when they come to America to do business, they don't want American workers to have a voice. When you hear that ‘it’s up to the workers’ kind of talk, it means we're in for a fight.

Q: IS THIS WHERE THE UNION HAS TO MAKE A STAND NOW — GETTING TOP WAGES AT THESE PLANTS?

A: At Ford, at GM, I'm very confident that we'll be successful with a card-check type of atmosphere. (Workers can sign cards to join a union.) I think it's essential for Ford and GM to have that position. It shows that they are truly engaged with maintaining strong American manufacturing jobs. If this technology holds, I believe it will grow, you'll see more critical component manufacturing coming back home to America. We’re working very hard to have extreme cooperation and extreme transparency with the Big Three automakers. In all my conversations with GM and Ford, I've been very comfortable that they get it, they understand it.

Q: GIVEN THAT EVs TAKE LESS LABOR TO BUILD THAN CURRENT VEHICLES DO, DO YOU FORESEE FEWER UNION AUTO JOBS?

A: I see growth for our union because we’re so diverse. When you look beyond auto manufacturing, in gaming and higher education, we’ve been steadily increasing our footprint. Overall, I see a gain. But in auto, I see a leveling-out point. I see additional jobs, if we capture all the component work and start bringing a lot of this work back home like you hear President Biden talking about.

Q: WILL IT TAKE A STRIKE — WILL YOU HAVE TO PLAY HARDBALL — TO REPRESENT THESE NEW JOBS?

A: I’m confident with the way we’ve been talking to these manufacturers, we'll get there. Our discussions have really changed for the positive. Whether or not we need to strike or take any kind of action would be dictated by the tone of the negotiations. I never go into negotiations with a strike in mind.