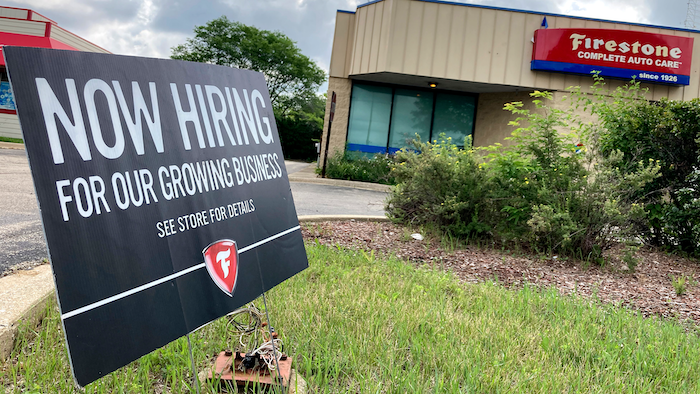 WASHINGTON (AP) — The number of Americans applying for unemployment aid fell again last week to the lowest level since the pandemic struck last year, further evidence that the job market and the broader economy are rebounding rapidly from the coronavirus recession.

The Labor Department reported Thursday that jobless claims dropped by 51,000 to 364,000. Applications for unemployment benefits have fallen more or less steadily since the year began. The rollout of vaccines has sharply reduced new COVID-19 cases, giving consumers the confidence to shop, travel, eat out and attend public events as the economy recovers.

Last week's drop in jobless claims was steeper than economists had expected. Applications for unemployment benefits have now fallen in 10 of the past 12 weeks.

All that pent-up spending has generated such demand for workers, notably at restaurants and tourism businesses, that many employers have been struggling to fill jobs just as the number of posted openings has reached a record high. But many economists expect hiring to catch up with demand in the coming months, especially as federal unemployment aid programs end and more people pursue jobs.

On Friday, according to the data provider FactSet, the government is expected to report that employers added 675,000 jobs in June. That would be a substantial number but still not at a pace that would allow the economy to quickly regain its pre-pandemic level of employment. The job market remains nearly 7 million jobs short of that level.

Some businesses have complained that expanded federal aid to the unemployed — especially a $300-a-week supplemental benefit, intended to cushion the economic blow from the pandemic — has discouraged some people from looking for a job.

But other factors, too, are believed to have contributed to the shortage of people seeking work again: Difficulty arranging or affording child care, lingering fears of COVID-19, early retirements by older workers, a slowdown in immigration and a decision by some people to seek new careers rather than return to their old jobs.

Responding to the criticism about the duration of expanded jobless benefits, dozens of states began dropping the expanded federal aid starting last month: Roughly half the states will end the $300 payments. Most of those will also cut off unemployment assistance to the self-employed, gig workers and people who have been out of work for more than six months. Nationally, the $300-a-week federal benefit will end Sept. 6.

The data firm Homebase reported that employment has actually grown more slowly in the states that had dropped the federal benefits than in those that kept it.

The job market’s improvement comes against the backdrop of a fast-rebounding economy. Growth for the just-ended April-June quarter is believed to have reached an annual pace of roughly 10%. And according to an index produced by the Conference Board, a private research group, consumer confidence nearly regained its pre-pandemic level in May.

With consumers feeling more confident about spending, the rate of jobless claims, which generally reflects the pace of layoffs, has dwindled over the past several months. The weekly figure had topped 900,000 back in January, when the economy was still struggling to emerge from the recession and employers were retrenching.

Despite the significant improvement since then, claims remain high by historic standards. Before the pandemic flattened the economy in March 2020, the weekly figure typically numbered around 220,000.