In resurgent cities, businesses were banking on continued growth to fund investments. 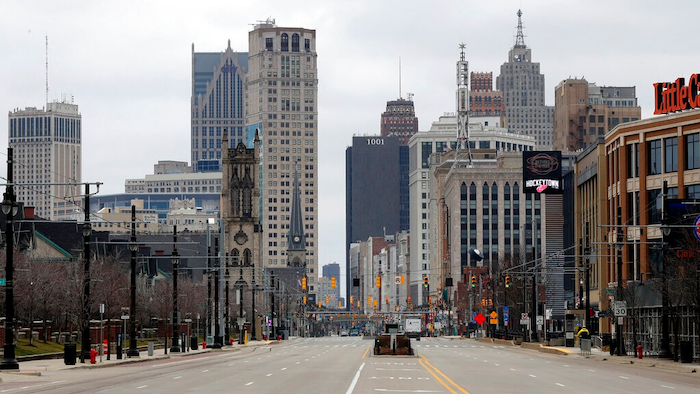 In this March 24, 2020 file photo, Woodward Avenue is shown nearly empty in Detroit. Before the coronavirus showed up, downtown Detroit was returning to its roots as a vibrant city center, motoring away from its past as the model of urban ruin. Now, with the coronavirus forcing many office workers to their homes in the suburbs, those who remain wonder if revitalization will ever return.
AP Photo/Paul Sancya

DETROIT (AP) — Downtown Detroit was returning to its roots as a vibrant city center, motoring away from its past as the model of urban ruin.

Then the pandemic showed up, emptying once-bustling streets and forcing many office workers to flee to their suburban homes.

Anthony Frank, who manages Dessert Oasis and Coffee Roasters on Griswold Street, said everyone loves Detroit’s comeback story, but a 20% drop in business has been difficult to handle.

“We definitely had to do a lot of soul searching just to try to make sure that we were able to keep this thing going,” said Frank, who is hopeful that things will eventually pick up again.

From midtown Manhattan to San Francisco, just about any city built around clusters of office buildings that used to bring in thousands of workers every day is feeling some degree of angst.

But experts say cities such as Detroit, Cleveland and Oakland, California, that were shedding years of decay and starting to turn a corner will have a harder time recovering because they don't have an established base of large office tenants. And even though downtown populations in Cleveland and Detroit are growing, their overall populations are still declining, making their comebacks all the more challenging.

If the virus persists, some businesses will ultimately close, and the damage could ripple through downtowns and hurt the businesses that remain, said Daniel Shoag, an economics professor at Case Western Reserve University in Cleveland.

“There's a possibility that this could be really bad in terms of wiping out the base and being really hard to start from scratch,” Shoag said.

In resurgent cities, restaurants, dry cleaners and other businesses were banking on continued growth to fund investments, said Christopher Mayer, a finance and real estate professor at Columbia University.

“Their (profit) margins weren’t that high, they were making a bet on the new neighborhood,” he said. “All of that I think has been upended, and I don’t know when it’s going to recover.”

In Cleveland, the downtown was thriving before the pandemic with two new residential towers opening and paint maker Sherwin Williams announcing a new headquarters with about 3,500 workers. Downtown's population is nearing 20,000, up 25% since 2010, the Downtown Cleveland Alliance says.

But the pandemic sent businesses on a downward spiral. At Maestro Tailor in the Playhouse Square theater district, owner Mark Srour’s alteration and clothing business is down 80% from before the virus. He’s hoping customers come back when theaters reopen and workers at nearby law firms and office towers stop working remotely.

“Sometimes I don’t pay myself," said Srour, who emigrated from Lebanon a decade ago. “It’s OK. As long as I can survive and keep going with my dream.”

But the pandemic left downtown Oakland businesses that were accustomed to daytime customers in a financial drought. Many once-busy restaurants are now boarded up while others are trying to survive by offering takeout.

“It’s like a ghost town,” Nohemi Perec, owner of Juice Joint, a 12-year-old Mexican deli, said on a recent afternoon when there were no lines at the once-bustling lunch spot. “We are just waiting for all the workers to come back, but I am hearing from some of my longtime customers that they are being told they probably aren’t coming back until next June or July."

Business is off roughly 80% since March, forcing Perec to cut staff in half while taking advantage of reduced rent that her landlord offered as lifeline.

Detroit's downtown was teeming with people before the virus. Since 2014, when the city emerged from bankruptcy, its downtown population rose nearly 22% to more than 13,000 by 2018. The number of people working downtown rose 12% from 2014 to over 62,000 in 2016, the latest year for census statistics.

People moved to refurbished lofts and new condominiums a short distance from Quicken Loans, General Motors and other employers. They bought coffee or lunch, and suburban commuters stayed for concerts and sports. Long-decaying skyscrapers were scrubbed clean and parks rejuvenated with food trucks and new places to play.

The pandemic struck a hard blow to the city government's revenue, which fell 12% in the fiscal year that ended June 30, said Dave Massaron, chief financial officer.

Motor City Wine, a bar in the Corktown neighborhood just west of downtown where Tiger Stadium once stood, lost half of its business. Local customers are keeping it afloat for now.

“This neighborhood was getting halfway there, and then got stunted,” said David Armin-Parcells, who owns the shop with wife Melissa. “That’s been Detroit’s story for 40 years, 50 years.”

The wine bar did well during the summer with its outdoor patio. But because most of its business is alcohol, it can’t seat a full house inside under state rules. Armin-Parcells isn’t sure what they’ll do as the weather turns cold.

The pain has spilled over to Detroit's outskirts, to nearby Dearborn. Before the pandemic, Ford was planning to revamp its depressing campus there with modern, open-feeling buildings.

“It’s clear that we don’t need the real estate footprint that we have had,” CEO Jim Farley said.

Ford has roughly 18,000 U.S. white-collar employees who can work from home, and the company says they won't return until at least next July. Many will stay home after that, at least part of the time.

Urban planners say a hybrid model is emerging where people would work remotely two or three days per week but still go to the office for meetings and human contact.

“I believe the workplace will change, but it will not go away,” said Janet Pogue McLaurin, global workplace research leader for Gensler, an architecture and planning firm.

Case Western's Shoag says if the virus can be controlled before businesses go under, then the redeveloping cities will come back.

Bedrock, the real estate arm of Quicken Loans and Detroit's biggest developer, is pressing on with projects despite the virus, said Sam Hamburger, vice president of leasing and acquisitions. The company believes that in the long run, people will want to be in a vibrant downtown, he said.

“The way you cultivate young talent is by having an exciting place to work and live,” he said. “From a long-term prognosis, I really believe that our cities and our downtown corridors will bounce back.”

The ship's 429 passengers and crew spent the night on the vessel as rescue units planned to tow it to safety.
Nov 23rd, 2020

About 10 million people will lose their benefits when two federal programs expire at the end of the year.
Nov 19th, 2020
Follow Us
Most Recent