Major construction projects are moving forward along the U.S. borders with Canada and Mexico. 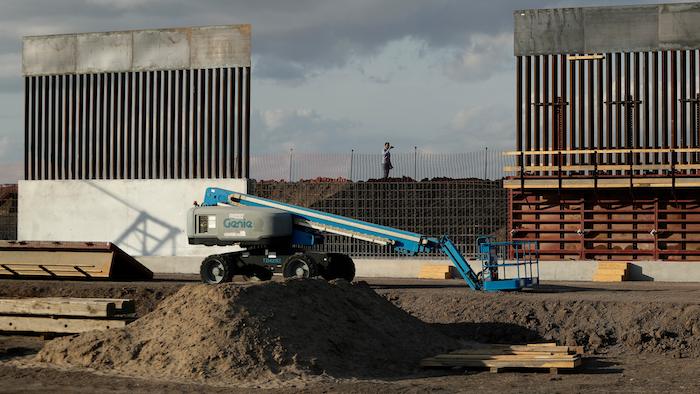 In this Nov. 7, 2019, file photo, the first panels of levee border wall are seen at a construction site along the U.S.-Mexico border, in Donna, Texas.
AP Photo/Eric Gay, File

BILLINGS, Mont. (AP) — Major construction projects moving forward along the U.S. borders with Canada and Mexico are raising fears the coronavirus could race through temporary work camps and spread to rural communities unable to handle an outbreak.

Despite a clampdown on people’s movements in much of the country, groups of workers travel every day from camps in New Mexico to build President Donald Trump’s border wall.

Along the northern border, a Canadian company says it will start work this month on the disputed Keystone XL oil pipeline, another Trump-supported project that could bring thousands of workers to rural communities in Montana, South Dakota and Nebraska.

Residents, tribal leaders and state officials have warned that the influx of outsiders could make problems worse in rural areas with little or no medical infrastructure capable of dealing with a surge of infections. The border wall and pipeline are exempt from stay-at-home restrictions intended to reduce the virus's spread.

Faith Spotted Eagle, an environmental activist and member of the Yankton Sioux Tribe in South Dakota, said she's reminded of her grandmother’s stories about the tribe's struggles to survive smallpox and the Spanish flu.

“It’s the 1800s again, the cavalry is coming in and they’re going to set up their fort, whether it’s justified or not,” she said.

In most people, the coronavirus causes mild or moderate symptoms that clear up within a few weeks. For some, especially older adults and people with health problems, it can cause severe illness and even death.

Cities have borne the brunt of the virus so far in the U.S., but rural areas are expected to be hit, too.

That's a fear in tiny Columbus, New Mexico, where residents worry about border wall workers who often gather outside the town's few restaurants despite an order to stay home and keep away from others.

In the town of less than 1,500 people, about 30 construction workers are living in tightly packed trailers, residents say. Others are staying at two small hotels while they put up bollard-style fencing along the scrub desert — a small piece of about 200 miles (320 kilometers) of barrier being built at the U.S.-Mexico border.

“My bottom line is nothing is worth thousands or hundreds or tens of people getting COVID,” said July McClure, who manages a local RV park and volunteers with the fire department.

About 100 miles (160 kilometers) west, Diana Hadley said construction has been “going on like mad” along the border in Arizona. Hadley, whose family owns a nearby cattle ranch, says workers carpooling and staying together in hotels makes it more likely the virus will spread.

“It would be safer if they just shut down the work — safer for them and for everyone else," she said.

The U.S. Army Corps of Engineers, which oversees contractors working on the southern border, said it follows federal guidelines but declined to share specifics on how it's protecting public health during construction.

Just south of the Canadian border, workers began arriving last month in the small Montana town of Glasgow where they'll stay during the 1,200-mile (1,930-kilometer) pipeline project. Keystone would carry up to 830,000 barrels (35 million gallons) of crude daily to a Nebraska terminal for refining or export through the Gulf of Mexico.

First proposed in 2008, the pipeline was rejected twice under President Barack Obama and revived by Trump. Alberta's government said it's investing more than $1 billion to get work going quickly.

Calgary-based TC Energy, the project’s sponsor, negotiated with health officials in Montana on a plan to minimize risks, including checking everyone entering work sites for fever and ensuring workers practice social distancing.

“Is it a perfect system? No. It's the best we can do to protect the county and our workers from them and them from us," said Anne Millard, health officer for Valley County, where the workers are staying.

The company had planned to build 11 camps housing up to 1,000 workers each along the pipeline’s route — six in Montana, four in South Dakota and one in Nebraska. Those plans are now under review, and Millard and other officials say they don't expect camps to be built until after the immediate threat of the virus has passed.

“We’re very cognizant of what’s going on,” TC Energy spokesman Terry Cunha said. “We’re talking about thousands of jobs. ... We want to make sure what they do will ensure the safety of everybody.”

The company says the $8 billion project would create more than 10,000 construction jobs, with about 100 workers initially at the border crossing.

Several tribes whose land is skirted by the proposed pipeline route in South Dakota and Montana have enacted stricter coronavirus measures than the states. Tribal members worry what a widespread outbreak would do to people already at risk because many have diabetes and high blood pressure.

Spotted Eagle said she did not believe quarantining workers and regular screenings would be enough to keep communities safe. Many health clinics have just a few beds and even fewer ventilators.

Floyd Azure, chairman of the Assiniboine and Sioux tribes on Montana’s Fort Peck Reservation, said the virus has so far spared the reservation.

He has no authority to stop work on the pipeline, which would run just outside the reservation’s boundaries. Azure worries construction workers will bring a repeat of the problems that accompanied an oil boom in the region last decade — from drugs to sex trafficking — now exacerbated by the virus.

“We're worried sick about it. We have enough problems on this reservation without someone creating more for us,” he said.