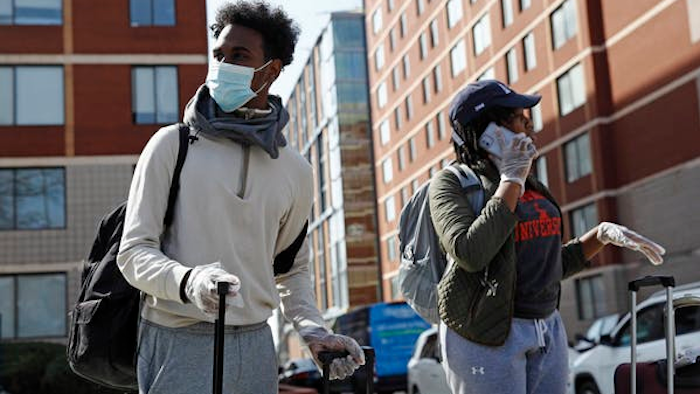 When universities closed their dorms during the coronavirus outbreak, it meant breaking contracts with students. Many schools, including Howard University, shown here, have agreed to pay partial refunds.
AP Photo/Patrick Semansky

The coronavirus pandemic has prevented countless people from fulfilling their contracts, from basketball players to babysitters.

Could all of these people be sued for breach of contract, or are they excused due to this extraordinary event? What about payments made in advance, such as tickets bought for a concert that has now been canceled or a dorm room leased at a college that is now closed?

Wars, floods and other pandemics have undermined innumerable contracts over the years. In response, U.S. courts have established a fairly clear set of legal rules to answer these questions.

As a contracts law professor, I help future lawyers think through how these rules apply in a wide range of situations. That includes what the law says about contracts that are impossible to meet during pandemics.

The rules of impossibility and restitution

A promise given in exchange for money becomes an enforceable contract, and it remains enforceable even if living up to its terms turns out to be more challenging than expected.

If a babysitter promises to look after your children once a week for US$50, she is bound to the contract regardless of car trouble, the kids misbehaving or other hardships. If the babysitter gives up, that is a breach of contract and she is legally liable to you. This is what makes a contract a contract and not an idle promise to give it a try.

But what if the babysitter failed to show up because a coronavirus outbreak made it physically dangerous for her to enter your house or because the government issued an order to remain home to avoid spreading the virus?

Because this type of extraordinary and unanticipated event, often called an “act of God,” is so radically different from the ordinary risks and challenges of babysitting, and because it makes her performance so much more difficult and dangerous than expected, the courts will excuse her from the contract. Through no fault of her own, her performance has become effectively impossible, and so her failure to babysit does not count as a breach of contract.

That is not the end of the story, though. Under the legal doctrine of restitution, which prohibits unjust enrichment at the expense of another, the babysitter would have to return any money you paid her in advance. She has not breached the contract, but neither has she fulfilled it, so it would be unjust for her to keep that money.

This basic framework – impossibility and restitution – applies generally to contracts that have been upended by the coronavirus pandemic and government orders to combat the virus’s spread.

It does not apply to every expense, however.

If you bought a $100 ticket for a Lady Gaga concert and the event has been canceled, there is no breach of contract, although Lady Gaga would have to refund your $100 as a matter of restitution. But if you bought a nonrefundable $50 train ticket to travel to the concert, Lady Gaga is not liable for that loss. Since that money was never paid to Lady Gaga, she can’t be held responsible for it.

In some cases, an escape clause is written into the contract specifically for situations like this. It’s called “force majeure,” which translates to “superior force” and is often referred to as the “act of God” clause.

Force majeure clauses are common in corporate contracts. They dictate which types of unexpected events will excuse performance and how to deal with payments already made or other losses. The precise wording of these clauses is key. Some might expressly mention pandemics or government orders, while others might not. Similarly, some clauses might call for full restitution, while others might provide for 50% refunds or no refund at all. Whatever the force majeure clause says will displace the ordinary rules of impossibility and restitution.

The contract between the NBA and its players, for example, includes a force majeure clause that specifically covers epidemics. It states that basketball teams can withhold part of their players’ salaries for each canceled game, and ESPN reported that the league was considering it.

Pepperdine University students who have been evicted from their dorms are also bound to a force majeure clause that specifies no refunds if the dorms are closed in the event of an emergency. This overrides the general rule of restitution.

All that said, parties to a contract are always free to waive their rights under a force majeure clause and provide refunds anyway. Pepperdine officials have promised to do exactly that.

This article is republished from The Conversation under a Creative Commons license. Read the original article here: https://theconversation.com/breaking-contracts-over-coronavirus-can-you-argue-its-an-act-of-god-134791.