It was dragged down by economic fallout from the coronavirus outbreak. 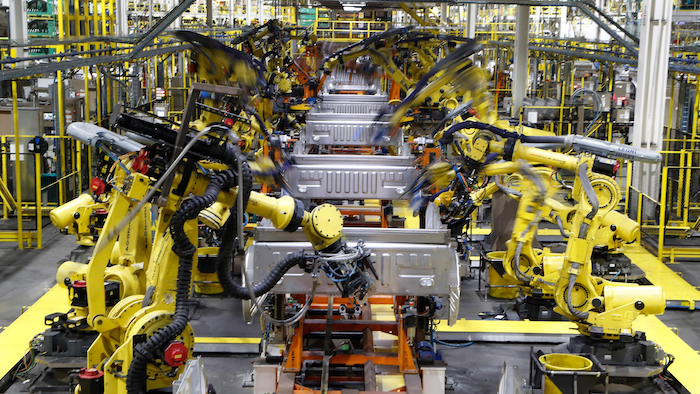 In this Sept. 27, 2018, file photo robots weld the bed of a 2018 Ford F-150 truck on the assembly line at the Ford Rouge assembly plant in Dearborn, Mich.
AP Photo/Carlos Osorio, File

WASHINGTON (AP) — Manufacturing contracted in the United States and around the world last month, dragged down by economic fallout from the coronavirus outbreak.

The Institute for Supply Management, an association of purchasing managers, reported Wednesday that its U.S. manufacturing index fell to 49.1 in March after registering 50.1 in February. Any reading below 50 signals a contraction. The index had signaled growth in January and February.

Economists had expected a bigger drop in the U.S. index. Timothy Fiore, chair of ISM manufacturing index committee, said that “things got worse’’ as March dragged on and predicted that the index will signal more weakness in April. New orders and factory employment fell last month to the lowest level since 2009. Production and export orders also fell.

The COVID-19 pandemic and the quarantines, travel restrictions and business closings imposed to combat it have hammered global manufacturers, disrupting their access to supplies and crushing demand for their products.

But the impact of the outbreak is falling even harder on service businesses such as restaurants and hotels.

“Manufacturing is not, for the most part, in the very front line of the virus hit, but nonetheless large swathes of the sector are vulnerable as consumers cut back on spending on goods, especially big-ticket items like cars and trucks," Ian Shephardson, chief economist at Pantheon Macroeconomics, wrote in a research report, adding that “while this headline ISM reading is a pleasant-looking surprise, don’t be fooled.''

Already weakened by President Donald Trump's trade war with China, manufacturers around the world are reeling from COVID-19 and its economic impact. J.P. Morgan reported that its manufacturing index for the 19 European countries that share the euro currency dropped last month to the lowest level in nearly eight years. Confidence among eurozone manufacturers fell to a record low.

Manufacturing in the Philippines dropped to the lowest level on record as authorities locked down Luzon, the country's biggest and most populous island, to combat COVID-19. J.P. Morgan also reported that Italy, the Czech Republic and Vietnam registered especially deep manufacturing contractions last month.