The company needs to preserve cash as vehicles sales fade due to the coronavirus outbreak. 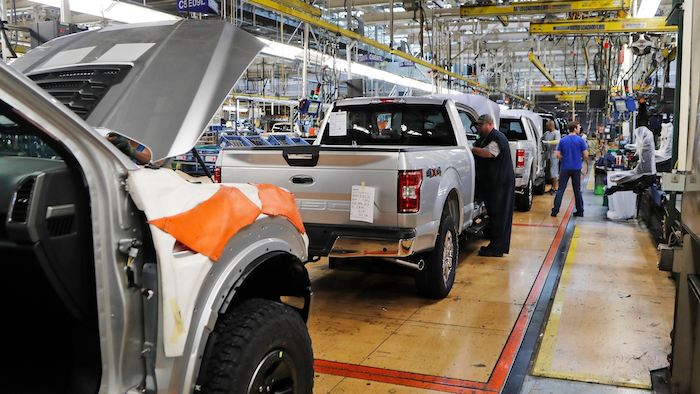 In this Sept. 27, 2018, file photo a United Auto Workers assemblymen work on a 2018 Ford F-150 trucks being assembled at the Ford Rouge assembly plant in Dearborn, Mich. The United Auto Workers union wants Detroit's three automakers to shut down their factories for two weeks to keep its members safe from the spreading coronavirus. But union President Rory Gamble says in an email to members obtained by The Associated Press that the companies were not willing to shut factories down.
AP Photo/Carlos Osorio, File

DETROIT (AP) — Ford is suspending its dividend to preserve cash as vehicles sales fade due to the coronavirus outbreak.

The company said it's drawing on two credit lines to put another $15.4 billion in cash on its balance sheet.

Like other companies, Ford Motor Co. also withdrew its financial guidance for the year Thursday.

The cash Ford saves will be used to offset the impact on working capital due to factory shutdowns.

On Wednesday Ford and other automakers announced that they will close all of their North American factories in the coming days. Factories in Europe and elsewhere have already been shut down.

Ford’s move is expected to be followed by many companies as they try to hoard cash to survive the uncertain impact of the COVID-19 infections. Automakers are especially vulnerable because under union contracts, they still have to pay much of their workers’ salaries even though vehicles aren’t being produced. Auto companies book revenue when they ship vehicles from the factory to dealers, so if no vehicles are being produced, most of their revenue stream is severed.

“Like we did in the Great Recession, Ford is managing through the corionavirus crisis in a way that safeguards our business, our workforce, our customers and our dealers,” CEO Jim Hackett said in a prepared statement.

The borrowing came from two unused lines of credit. The company said that at the end of last year, it had $22 billion in cash and $35 billion in liquidity.

Ford is in much better shape than it was in 2007, when then-CEO Alan Mulally mortgaged its factories, brand names and other items to secure a $23.4 billion line of credit to weather the Great Recession.

Cutting the dividend will help the company continue to invest in new vehicles this year, and in long-term growth initiatives, Ford said in a statement. Before the suspension, the dividend yield was over 14%.

Even before the COVID-19 crisis, Ford was struggling as it was in the middle of an $11 billion restructuring program to prepare for a future of electric and autonomous vehicles. The company’s profit last year plunged by more than $3.6 billion, weighed down by slowing U.S. sales, the cost of a botched SUV launch and some big pension expenses.

Ford made a pretax profit of $6.4 billion in 2019, and its guidance for this year didn't show much improvement, if any. On Feb. 4, the company said it would make $5.6 billion to $6.6 billion before taxes in 2020, not including any impact from the coronavirus outbreak, which at that time had started in China.

The company said Thursday it would give further guidance when it announces first-quarter earnings on April 28.