Temperature readings among new measures the White House has put in place to protect President Donald Trump and his staff during the outbreak. 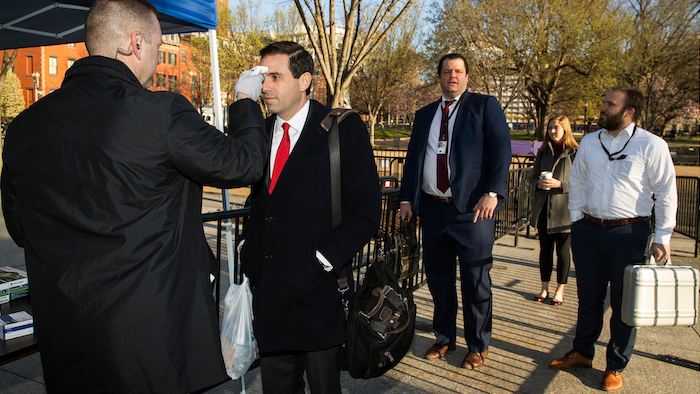 WASHINGTON (AP) — Journalists and staff entering the White House complex Monday received a welcome designed for the age of the coronavirus: a thermometer placed near the forehead to check their temperatures.

The temperature readings are among new measures the White House has put in place to protect President Donald Trump and his staff during the outbreak. They expand on screenings begun over the weekend for anyone who will be close to Trump and Vice President Mike Pence.

The White House Correspondents' Association also has announced steps to safeguard the health of its members who provide news coverage of Trump and the administration.

Those steps include limiting seating in the briefing room by leaving every other chair unoccupied, according to federal guidelines that require individuals distance themselves from one another in an effort to slow the virus' spread. A new seating chart also was distributed.

‘"I’m glad to see that you're practicing social distancing," Trump quipped as he entered the room Monday for a coronavirus briefing. “That's very good.”

White House officials greeted staff and journalists as they arrived Monday by swiping their foreheads with a temporal thermometer. Only those with a reading of 99.6 degrees Fahrenheit (37.6 degrees Celsius) or below were allowed into the complex.

Inside the James S. Brady Press Briefing Room, orange signs taped to the back of many seats let reporters know that chair was to remain unoccupied during briefings to ensure social distancing.

The White House Correspondents’ Association also called on all members to stay home or work remotely, if possible, and to keep a bare level of staffing at the White House.

Journalists who were left off the updated seating chart or who do not belong to the “pool” of news organizations that provide regular coverage of the president are not being allowed into the complex.

Trump has had contact with several people who later tested positive for the coronavirus, including the press aide for Brazil's president.

Trump initially refused to be tested, but said Saturday that he had been. The White House doctor reported late Saturday that the test came back negative. Trump, 73, would be considered at risk because of his age.

Pence, whom Trump tapped to coordinate the administration's response to the coronavirus outbreak, said Monday that he has not been tested but consults regularly with White House doctors and checks his temperature daily.

For most people, the new coronavirus causes only mild or moderate symptoms, such as fever and cough. For some, especially older adults and people with existing health problems, it can cause more severe illness, including pneumonia. The vast majority of people recover from the virus.

The White House has also paused its internship and volunteer programs, stopped public tours and canceled large events through the end of March. It has closed the in-house, Navy-run restaurant where many staffers get daily meals and encouraged them to work remotely.

To limit the number of journalists in the briefing room, television networks agreed to “pool” camera coverage so that just one crew would cover the briefings and share footage with all the other networks, instead of having multiple crews covering the same event.