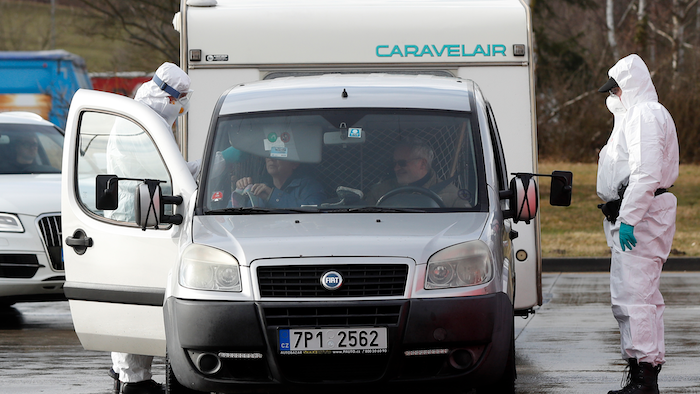 A member of the medical staff measures the temperature of a traveller at the border crossing with Germany in Rozvadov, Czech Republic, Monday, March 9, 2020. Czech authorities started on Monday random checks of arriving vehicles at the border crossings with Austria, Germany and Slovakia in reaction to the outbreak of the new coronavirus in Europe, particularly in Italy. As part of the move, officials measure the temperatures of some passengers in cars, trucks and buses.
AP Photo/Petr David Josek

NEW YORK (AP) — U.S. companies buffeted by supply chain chaos and a growing awareness of the scope of a viral outbreak are facing new threats to begin the week. An oil war between Saudi Arabia and Russia sent the price for a barrel of U.S. crude below $34.

Typically, falling energy prices are good for markets and for businesses. However, in times of economic duress, energy prices come to be seen as a barometer of the global economy overall. That appeared to be what happened Monday with crude prices suffering the largest single-day decline since the days following the Sept. 11 attacks.

Here are some of the developments that are affecting businesses and potentially, the economy as a whole.

Stock prices tumbled so sharply at the opening bell a circuit breaker meant to slow down panic trading was triggered, halting all trading for 15 minutes. That appeared to work as intended, but the Dow, S&P 500 and Nasdaq are all down sharply, between 5% and 6%. Treasury bonds continue to grow more expensive with so many investors looking for a safe place to park their money. The 30-year Treasury yield fell to all-time lows below 1%. The 10-year Treasury, which fell below 1% last week, is plumbing new depths Monday.

A clash between Saudi Arabia and Russia is sending shock waves through energy markets, with wide-ranging implications for consumers, industries, and of course, big oil companies. The single-day plunge in U.S. crude prices surpassed declines that occurred shortly after the Sept. 11 attacks. The price of U.S. crude fell as much as 34% to $27.34 a barrel. Energy companies had already been pulling back on spending with clear signs of slowing global economic growth. Investors dumped shares of some of the biggest producers in the world. On Monday, shares of Marathon Oil plunged 40%. Occidental Petroleum slumped 35%. The winners, at least at the pump, will be consumers, though no one knows when gasoline prices will fall.

Since a ship was quarantined for two weeks off of Yokohama, Japan, few sectors have been harder hit by the virus than the cruise industry. It got worse over the weekend. The U.S. State Department has issued an advisory against travel on cruise ships, particularly for travelers with underlying health conditions. Separately, the CDC noted an “increased risk of infection of COVID-19 in a cruise ship environment.” On Monday, shares of Royal Caribbean Cruises fell 25%, shares of Norwegian Cruise Line fell 18%, and Carnival fell 17%.

Federal and state officials in California prepared to receive thousands of people Monday from a cruise ship that has been idling off the coast of San Francisco with at least 21 people aboard infected with the coronavirus. Fences were being installed at an 11-acre site at the port of Oakland, as authorities readied flights and buses to whisk the more than 2,000 passengers aboard to military bases or their home countries for a 14-day quarantine. More than 3,500 people on the ship hail from 54 countries. The Regal Princess cruise ship was finally allowed to pull into a Florida port and passengers began disembarking after two crew members tested negative for coronavirus. The Regal Princess was originally to have docked Sunday morning in Port Everglades but instead spent most of the day sailing up and down the coast.

Another sector within the hospitality industry, hotels, have been heavily damaged by the spread of the virus. With companies canceling or postponing business travel and conventions, and airlines suspending flights, room cancellations, or rooms never booked, are soaring. Analysts with Raymond James said Monday that most investors have been “overly optimistic” about the impact on hotels. Shares in Hyatt Hotels are down more than 6% Monday. Hilton fell more than 4%.

Disneyland Paris says a male backstage cast member has tested positive for COVID-19 but that the park will remain open. The staffer, who was not named and whose age is not known, was already on sick leave when Disney was notified about the infection Sunday. He is receiving treatment. All three Asian parks -- Shanghai Disneyland, Hong Kong Disneyland and Tokyo Disney Resort – have been closed over the virus outbreak. Disney said Shanghai Disney Resort partially resumed operations Monday.