It took 2 weeks of pounding. 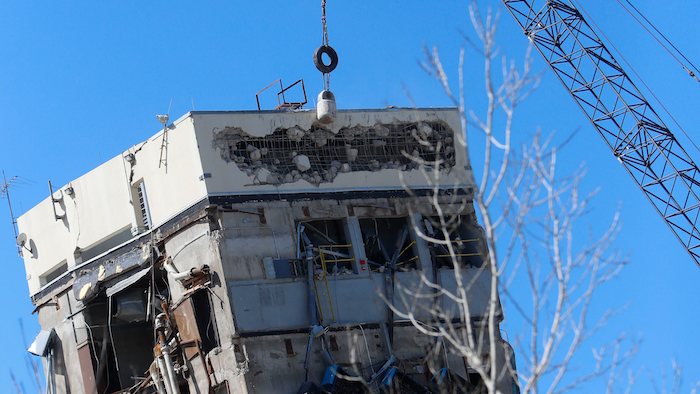 A wrecking ball smashes against the "Leaning Tower of Dallas" north of downtown Dallas, Monday, Feb. 24, 2020. The still-standing structure is part of the 11-story former Affiliated Computer Services building that found a second life online after a Feb. 16 implosion attempt. The company that engineered the blast said some explosives did not go off.
AP Photo/LM Otero

DALLAS (AP) — The Leaning Tower of Dallas, the nearly iconic remnant of a high-rise building implosion gone awry, finally collapsed in a cloud of dust Monday after two weeks of being whacked with a headache ball.

The tower collapsed about 3:15 p.m. after a few last whacks with a wrecking ball swung by a high-rise crane. No injuries were reported.

The tower was the core of an 11-story building that was imploded with explosives on Feb. 16. The 11 floors surrounding the core duly collapsed, but the solid concrete core containing the stairway and elevator shafts remained standing at an angle. The demolition contractor has been whacking away at it ever since with a 5,600-pound wrecking ball.

A spokeswoman for De La Vega Development, which is redeveloping the site, had said immediately after the implosion that the tower's demolition could take up to four days. It ended up taking almost four times that amount of time before it was taken down.

In the meantime, the tower drew hundreds of people who took often-whimsical photographs of themselves with the tower in the background.