The company that created the blast plan called the building 'tough.' 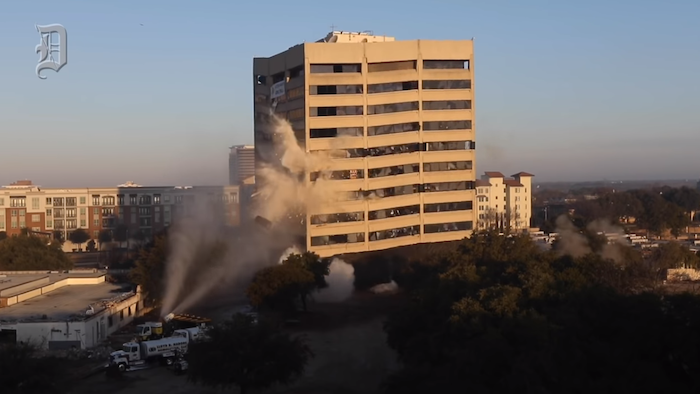 Still from a video posted by the Dallas Morning News on YouTube.

DALLAS (AP) — A social media sensation dubbed the “Leaning Tower of Dallas” was born when a portion of a building survived an implosion in Dallas.

After the implosion Sunday failed to bring down the core of the 11-story former Affiliated Computer Services building, the online jokes and photos began. Many, inspired by Italy's Leaning Tower of Pisa, posted photos showing themselves pretending to prop up the lopsided tower.

One Twitter user quipped, “Oops, an implosion masterpiece!!” Another asked “Who needs Pisa? We have the Leaning Tower of Dallas.”

An online petition even popped up to “save this landmark from destruction," noting, "if anything, do it for the memes.”

Lloyd Nabors, whose company is handling the demolition, said crews will use a wrecking ball to take down the remaining tower, which included the elevator shafts.

Steve Pettigrew, president of the company that created the blast plan and handled the explosives, said all of the explosives did go off.

"That type of construction with the central core and the outer columns — they’re tough, obviously," he said.

Nabors said the tower is leaning in the direction it was intended to fall, and there aren't any safety concerns.

The building is being demolished to make way for a $2.5 billion mixed-use project.