Property owners had no grounds to sue. 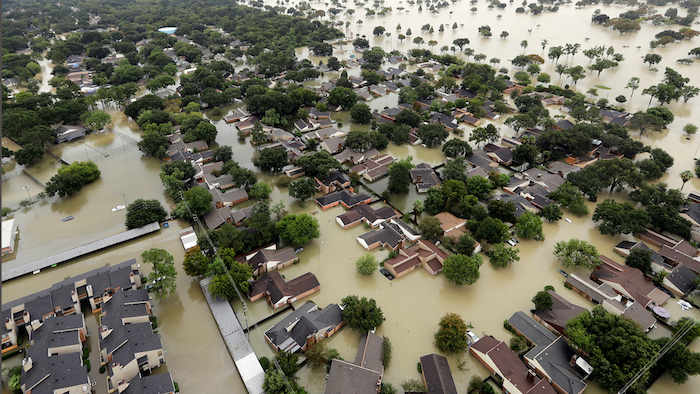 In this Aug. 29, 2017, file photo, water from Addicks Reservoir flows into neighborhoods from floodwaters brought on by Tropical Storm Harvey in Houston. A federal judge ruled the U.S. Army Corps of Engineers was not liable for damages to thousands of Houston homes that were inundated by two federally owned reservoirs in the days following Hurricane Harvey because they would have flooded regardless. U.S. Judge Loren A. Smith of the Court of Federal Claims dismissed the case on Tuesday, Feb. 18, 2020.
AP Photo/David J. Phillip, File

HOUSTON (AP) — A federal judge has ruled the U.S. Army Corps of Engineers isn't liable to damage to thousands of Houston homes that were inundated by two federally owned reservoirs in the days following Hurricane Harvey because they would have flooded regardless.

U.S. Judge Loren A. Smith of the Court of Federal Claims on Tuesday dismissed the case against the government. Smith said property owners downstream of the Addicks and Barker dams, located about 20 miles (30 kilometers) west of downtown Houston, had no grounds to sue given the unprecedented nature of Harvey's flooding in 2017.

“This storm, which overwhelmed the system’s capacity was classified as a once in 2000-year event” Smith wrote. “... The answer of what caused the damage is thus inescapable to the Court’s eye and mind. The damage was caused by Hurricane Harvey, and such a hurricane is an Act of God, which the government neither caused nor committed.”

Another judge from the same court ruled in December that the Army Corps was liable for damage caused to property owners from water that backed up above the dams.

The Army Corps’ operation of the two reservoirs became a major flash-point — and the subject of sweeping legal actions — after Harvey as homes located both upstream and downstream of the dams flooded.

Hurricane Harvey, which made landfall as a Category 4 storm on Aug. 25, 2017, killed 68 people and caused an estimated $125 billion in damage in Texas. In the Houston area, Harvey caused 36 deaths and flooded more than 150,000 homes.

During Harvey, the reservoirs behind the dams got so full that the Corps released a deluge into Buffalo Bayou, which has been boxed in by development.

Those “controlled releases," which the Corps increased substantially in the storm's aftermath, propelled water into thousands of homes and businesses that would not have otherwise flooded. Their owners felt they had emerged from the fiercest rainstorm in modern U.S. history largely unharmed.

Attorneys for some downstream plaintiffs said they were disappointed with the judge’s conclusions.

“Judge Smith’s ruling is also contrary to other case precedents, either from the Supreme Court or the Court of Federal Claims,” said the lawyers from McGehee Chang, Landgraf, Feiler, noting they may consider an appeal.

Smith set up a telephone status conference concerning the case for Feb. 26.

Law firms representing other downstream property owners noted that they were still reviewing the ruling.

The U.S. Department of Justice did not respond to media requests for comment.