A look at the latest developments. 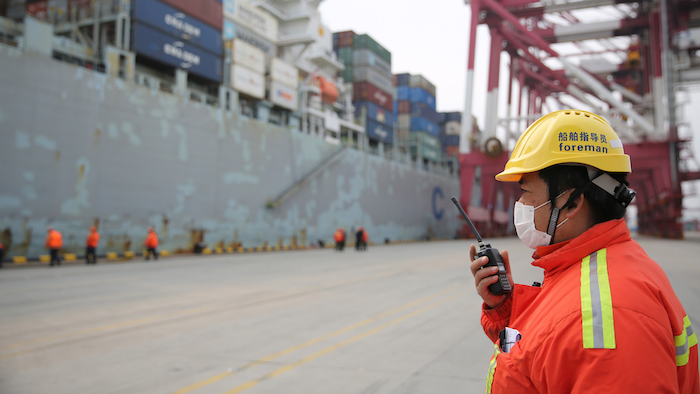 In this Feb. 4, 2020, photo, a foreman wears a face mask as he communicates via radio at a container port in Qingdao in eastern China's Shandong Province. Deaths from a new virus rose to 490 in mainland China on Wednesday while new cases on a Japanese cruise ship, in Hong Kong and in other places showed the increasing spread of the outbreak and renewed attention toward containing it.
Chinatopix via AP

BEIJING (AP) — Automakers are considering whether to resume operations in China amid efforts to contain a virus outbreak, but the impact is spreading for many other companies.

Here is a look at the latest developments as of Wednesday:

NISSAN MOTOR CO.: The Japanese automaker says it is considering reopening some factories in China on Monday but operations in the province at the center of the virus outbreak won't resume until at least Feb. 14. Nissan has a factory and offices in Wuhan, the city where the first virus cases were reported in December.

TOYOTA MOTOR CORP.: The automaker said it will decide Monday on further action for its 12 idled factories in China. Four of the facilities are vehicle assembly plants and the rest produce parts.

CATHAY PACIFIC AIRWAYS: The Hong Kong airline asked its 27,000 employees to take three weeks of unpaid leave while it struggles with plunging revenue. Cathay cut flights to mainland China by 90% this week and worldwide capacity by 30% after Beijing canceled group tours and told businesspeople to put off foreign travel. The South China Morning Post said CEO Augustus Tang, in a video message to employees, said the situation was as grave as the 2009 financial crisis.

AIRBUS: The European aerospace company has closed its plant in northern China that assembles A320 passenger jets. A statement from the company gave no indication Wednesday about when the assembly facility in Tianjin might reopen. It said the company’s China operation is observing government requirements that employees work from home where possible. It also said restrictions imposed on travel in China and internationally “are posing some logistical challenges” for the company and it is “monitoring any potential knock on effects to production and deliveries.”

WALT DISNEY CO.: The company says fewer people stayed in its Hong Kong properties, offset by growth in Shanghai before Disney parks in both cities closed due to the virus. The company said the impact of a two-month shutdown on the current quarter's operating income would be $175 million.

RALPH LAUREN CORP: The fashion brand says it has temporarily closed about half of its 110 stores in mainland China. CEO Patrice Louvet said the company has diversified its supply network away from China over the past two years because of the U.S.-Chinese tariff war. “We’ll need to see how employees return” to factories after the holiday, said Louvet during an earnings conference call. “We are working on being as agile as possible.''

CAPRI: Capri Holdings Ltd, the parent company of such designer brands as Versace and Jimmy Choo, is putting a price tag on the disruption it has suffered. As of Wednesday, 150 of its 225 stores in Mainland China are temporarily closed.The New York-based company says it expects the impact of the new virus to reduce revenue by $100 million and earnings per share by 40 cents to 45 cents for the fiscal fourth quarter and full year. The quarter covers the January through March period.

MOBILE WORLD CONGRESS: The organizer of the wireless tech industry’s biggest trade show, due to be held in Barcelona this month, is taking extra precautions. It will make disinfectants available, increase cleaning of high-traffic areas and advise people against shaking hands. South Korean tech company LG is pulling out from the event to keep employees safe, while China's ZTE is canceling its press launch.

NIKE: The athletic gear maker has closed about half its company-owned stores in China, where it booked $6.2 billion in sales last year, about 16% of all its sales. At stores that are still open, it has reduced opening hours. The company did not discuss the impact on manufacturing. Nike employs 152,800 factory workers in China, about 14% of all its factory jobs, and 21% of its footwear, apparel and equipment is produced in the country.