Shakeup at Company Planning $1.7B Plant

The project is staked to millions in taxpayer money. 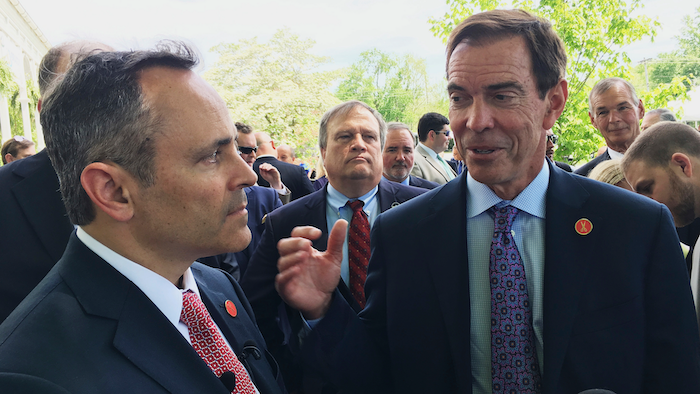 In this April 26, 2107 file photo, Braidy Industries Inc. CEO Craig Bouchard, right, and Republican Gov. Matt Bevin speak with reporters in Wurtland, Ky. Braidy Industries said Thursday, Jan. 30, 2020, that its chairman and CEO, Craig Bouchard, would step down from that role but would remain a member of the company's board of directors. The company offered no reason for the change, which comes at a crucial time for efforts to build the mill near Ashland.
AP Photo/Adam Beam, File

FRANKFORT, Ky. (AP) — An aluminum company planning to build a $1.7 billion plant in Appalachia announced a management shakeup as it tries to complete financing for a long-promised Kentucky project staked to millions in taxpayer money, but the company's top executive later disputed that he had stepped down.

The boardroom drama began when Braidy Industries said Thursday that its chairman and CEO, Craig Bouchard, would step down from that role but remain a member of the company's board of directors. The company offered no reason for the change, which comes at a crucial time for efforts to build the mill near Ashland.

Bouchard disputed the company announcement Friday, saying on social media that he did not authorize the company release and had not relinquished his job.

Despite the confusion, the company forged ahead with its plans.

The company announced Thursday that its current president, Tom Modrowski, had been named interim CEO and current board member Charles Price would serve as board chairman.

On Friday, in a response to Bouchard, Price said the company's board had “confirmed" its action this week removing Bouchard as CEO and chairman.

Braidy has said the shakeup comes as the company enters “its final fundraising stage."

“Tom and the board will continue to focus our efforts on completing fundraising and planning for construction of the Ashland mill," Price said in the Thursday release.

Despite those assurances, the Kentucky Senate's top leader expressed uncertainty Friday when asked if he remains confident the project will come to fruition.

“Until it gets built, you always have to have concerns," Senate President Robert Stivers, a Republican, told reporters.

Bouchard had been the public point man for the project — long touted to bring a badly needed infusion of jobs to a struggling region. The company has said it will create 1,500 construction jobs and more than 650 full-time jobs once the plant starts production. The mill is to be built not far from where Ohio, Kentucky and West Virginia meet on the Ohio River.

The Bluegrass State also has a financial stake in the project.

In a rare move, former Republican Gov. Matt Bevin persuaded the state legislature to approve a $15 million investment in the project, making taxpayers partial owners of the planned mill.

The state investment sparked a legal fight, led by the Courier-Journal, for records detailing the company’s finances. Democratic Gov. Andy Beshear’s administration recently released those records that Bevin's administration had fought in court to withhold.

Word of the company's shakeup brought responses from the top levels of state government Friday.

“We were previously advised of these changes and it is our understanding they do not impact the current status of the project.” Beshear spokesman Sebastian Kitchen said in a statement before Bouchard's social media post disputing the company announcement.

The governor's office later said it didn't have any additional information to share.

Republican House Speaker David Osborne noted that local officials near the planned mill remain confident that the project is moving forward and will be completed.

“I know this governor's office is committed to seeing it through," the speaker said. “It's a project that's going to mean generational change for that area."