Fun at Work Can Boost Morale

Many businesses are happy to let staffers have some fun amid major sporting events as long as they get their tasks done. 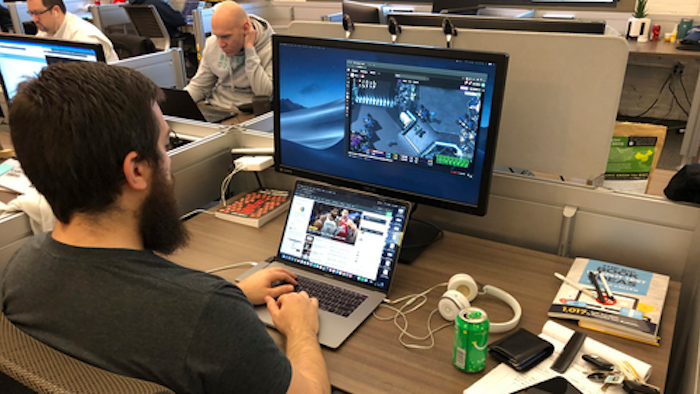 NEW YORK (AP) — No work will be done at Rotogrinders.com next Monday. The company gives its staffers the day off after the Super Bowl and Rotogrinders' two-day celebration of the game.

Chief Operating Officer Cameron MacMillan doesn't worry about one day's lost productivity; he sees the day off as an investment in his staffers who run a website for fantasy sports fans. He also shrugs it off when employees of the Nashville, TN-based company talk about the game when they're on the clock.

“What we give, we'll get back," says MacMillan, whose company hosts a party for staffers and their friends with a basketball game, mechanical bull rides and plenty of food.

And when March Madness arrives, MacMillan will also be happy to have staffers watching the first round of the basketball tournament at their desks.

Sports can be a distraction at work the first few months of the year as pro football and college basketball hold their premier events. Business owners must choose — whether, like MacMillan, they'll allow or encourage staffers to enjoy the moment, or demand that everyone focus on work. For many, the answer is to let staffers have some fun as long as they get their tasks done. Bosses realize that sports chatter and Super Bowl or NCAA celebrations are morale boosters and strengthen staffers' ties to their jobs, something that's increasingly important in a tight labor market. But employment law attorneys and human resources consultants have some caveats for owners, particularly when it comes to office betting pools.

Although interest in the Super Bowl is widespread — nearly 100 million people watched it on TV last year — lengthy conversations about the game, halftime show and commercials can rankle owners. The same goes for March Madness, the Olympics and the World Cup.

“I’ve had clients who have complained about the amount of downtime that these events have caused. They ask, ‘should we limit it?'" says Mark Kluger, an employment law attorney in Tinton Falls, New Jersey.

That can be shortsighted, Kluger says.

“The past few years, it's been more difficult to find employees," Kluger says. “Employers do have to be more sensitive to keeping employees happy.”

Owners might want to take the long view — events like the Super Bowl or March Madness happen once a year. And even if there's a lot of discussion, say, about a TV series like "Game of Thrones,” the boss might want to be grateful for the warm, collegial atmosphere and not worry so much about dollars and cents.

At some point, owners may need to remind staffers there's work to be done. At MyCorporation.com, an online business consultancy, staffers can be so engrossed in conversations that the bosses need to say, “let's get rolling, it's a busy day," CEO Deborah Sweeney says.

But Sweeney is also a big fan of using events like the Super Bowl to keep morale high and employees motivated.

“I want to have fun. When they see that in leadership, they feel committed to the job and that translates to happier customers," says Sweeney, whose company is based in Calabasas, California. So MyCorporation.com has a pre-Super Bowl potluck party, celebrations for St. Patrick's Day, Cinco de Mayo and “anything we can think of," Sweeney says.

When owners decide to end a conversation about any topic, they need to be sure they're not favoring one staffer's chatter over another's. For example, tolerating or even participating in a dissection of last night's game but cutting off talk about children, cars, shopping or whatever is on everyone's mind. A worker who feels shut down can feel discriminated against, and either leave or bring a lawsuit against the company.

A bigger productivity buster is employee absences — an estimated 17.5 million workers may miss work the day after the game, according to a survey commissioned by Kronos, a human resources provider. But in many cases, the boss has warning — an estimated 11.1 million employees will take a day off approved in advance. Another 4.7 million said they'd call in sick.

March Madness presents another issue — employees who want to watch the games at work the first two days of the tournament. The ability to stream games on PCs means anyone can watch throughout the day. Not only does productivity drop, but if too many people are streaming, the company's bandwidth can be sapped.

At many companies, there are TVs in break rooms, and staffers tend to congregate during the last few minutes of a game. MyCorporation.com has comfortable chairs in the break room.

“People hang out and send out updates to everyone else. Usually people are respectful and, they don’t over do it," Sweeney says.

At Rotogrinders there are big screens on the walls, giving employees the choice of a communal experience or watching games at their desks.

“We always have employees watching. We don't try to fight that," McMillan says. "We try to inspire a very new age, forward-thinking work culture.

Even at companies where there are are no parties or TVs, sporting events are a big deal because as staffers and often owners take part in betting pools. One of the biggest topics of March Madness conversations is about everyone's bracket. But while tens of millions of workers bet in Super Bowl and NCAA tourney pools, they are taking part in gambling that's illegal.

Owners should steer clear of running the pool or sponsoring it, and no one should be pressured to take part. Bosses should know there can be disagreements and hard feelings, and possibly some complaints from staffers who are against gambling for religious or other reasons.

But betting has an upside, Kluger says: “There's obviously a certain amount of camaraderie in doing the office pool — there's no question that those things are part of workplace culture.”