The looming production shutdown of Boeing 737 Max jets is taking a toll on a key supplier. 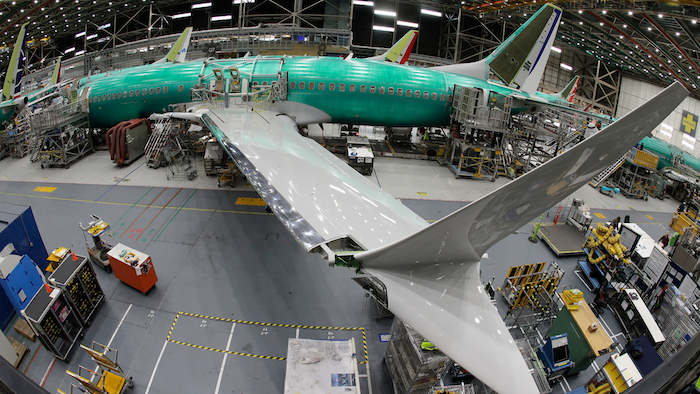 n this March 27, 2019, photo taken with a fish-eye lens, a Boeing 737 MAX 8 airplane sits on the assembly line during a brief media tour in Boeing's 737 assembly facility in Renton, Wash. The looming production shutdown of Boeing 737 Max jets is taking a toll on a key supplier. Spirit AeroSystems Holdings Inc. is asking employees if they will take voluntarily buyouts. Spirit suspended production of fuselages and other parts for the Max on Jan. 1, 2020, after Boeing told the Wichita, Kansas, company to suspend shipments.
AP Photo/Ted S. Warren

WICHITA, Kan. (AP) — Spirit AeroSystems Holdings Inc. is asking employees if they will take voluntarily buyouts. Spirit suspended production of fuselages and other parts for the Max on Jan. 1, after Boeing told the Wichita, Kansas, company to suspend shipments.

Spirit employees learned about the buyout offer – with terms depending on union contracts for workers in Wichita, Tulsa and McAlester, Oklahoma – in a Monday memo from CEO Tom Gentile, who said the company still has no clear idea of when Max production will resume.

“We are discussing different scenarios with Boeing but nothing has been decided,” Gentile wrote. He said the company will likely have to make decisions about cutting jobs “in the days and weeks ahead” because of expected lower production rates when the Boeing work returns.

Gentile did not say how many employees the company would like to see leave. Spirit has about 17,000 employees, including 15,000 in the U.S.

The Boeing 737, including the Max, represents more than half of Spirit’s revenue. Spirit warned last month that suspending Max production would hurt the company’s financial results and cash flow, and it was evaluating “all potential actions” to get costs in line with lower production expected in 2020.

Boeing expects to temporarily shut down production of the Max, which has been grounded for nearly 10 months, after two crashes killed 346 people. The assembly line near Seattle will shut down in mid-January. The company said Monday that it does not plan layoffs.

In a memo to employees, Boeing said some of the 3,000 affected Max workers will be reassigned to the 777 and 787 jets, some will oversee storage of parked jets in Washington state and Southern California, and some will draw other assignments.

Chicago-based Boeing Co. hasn’t said how long production will be halted. The company still has work to complete before it can win approval from the Federal Aviation Administration for changes it is making to software and other systems on the plane. The FAA has said repeatedly it has no timetable for approving Boeing’s work.