Boeing continues to trail Airbus in both orders and deliveries. 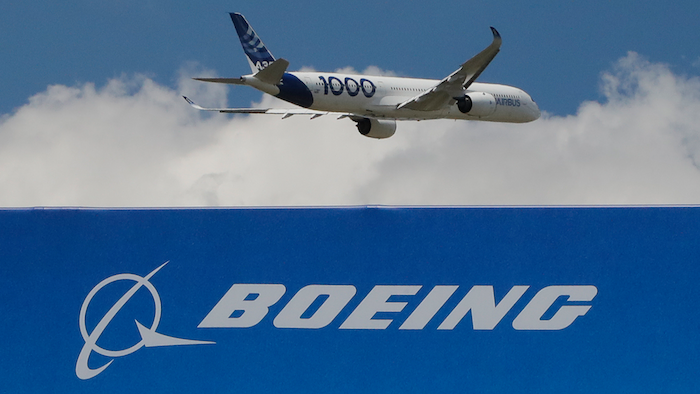 In this June 17, 2019, file photo, an Airbus A 350 - 1000 performs his demonstration flight at Paris Air Show in Le Bourget, east of Paris, France. Boeing's grounded 737 Max got a boost from two orders in November, but the American aircraft company continues to trail Europe's Airbus in both orders and deliveries of airline planes. Boeing disclosed Tuesday, Dec. 10, that it received 11 net orders in November, 63 new orders but 52 cancellations.
AP Photo/Michel Euler

Boeing's grounded 737 Max got a boost from two orders in November, but the American aircraft company continues to trail Europe's Airbus in both orders and deliveries of airline planes.

Turkey's SunExpress ordered 10 Max jets, and an unidentified buyer took 20. However, 10 other Max orders were canceled or switched to other Boeing planes, the company said.

Orders for the Max vanished for several months after the plane was grounded in March following two crashes that killed 346 people. Boeing is behind schedule in completing changes to software and computers that it hopes will convince regulators to let the plane fly again.

The Chicago-based company delivered 24 planes in November, down from 79 a year earlier, when half the planes it shipped were Max jets. Boeing halted Max deliveries after the grounding, cutting off a vital source of cash flow.

By contrast, Airbus reported last week that it took 222 new orders — 120 in one deal with Air Arabia — and delivered 77 commercial planes in November.

Boeing could deliver fewer than half the planes it shipped in 2018. Through November, it recorded 345 deliveries this year, far behind the pace of last year, when it finished with 806 deliveries.

Chicago-based Boeing has said the company hasn't lost a major order because of the Max crashes. But some customers have shifted orders to other Boeing planes, a Saudi discount carrier backed out of a tentative deal for Max jets, and Boeing lost other orders because of the financial collapse of India's Jet Airways.

Analysts for financial services firm Cowen said Tuesday that Boeing's November deliveries were better than expected, and even the 11 net orders were “decent.” The analysts said, however, investors are likely to keep focusing on delays in the Max's return to service and on growth in global air travel.