Researchers Calculate Emissions Due to Electricity Loss on the Grid

Globally, it's a lot. 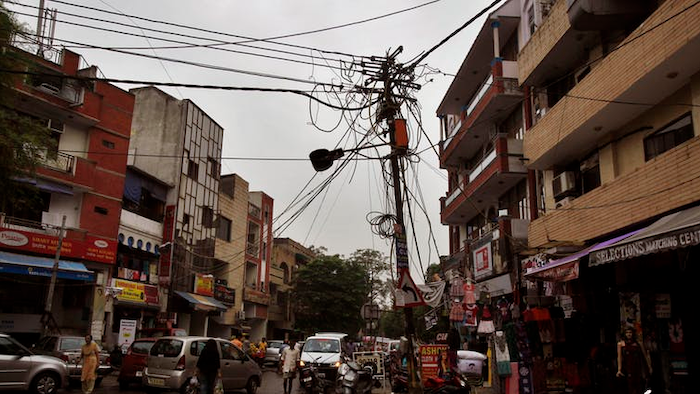 A power pole in New Delhi, India. Reconfiguring wiring on the local electric grid is one way to reduce loss through inefficient transmission of power. Theft of power is a large contribute to energy loss.
AP Photo/Rajesh Kumar Singh

When it comes to strategies for slowing the effects of climate change, the idea of reducing wasted energy rarely gets a mention. But our recent Nature Climate Change article makes the case that reducing wastage in the power sector, focusing specifically on the grid, can be a critical lever in lowering national emissions.

Inefficient global power transmission and distribution infrastructure requires additional electricity generation to compensate for losses. And countries that have large shares of fossil fuel generation and inefficient grid infrastructure, or a combination of the two, are the predominant culprits of what we call “compensatory emissions.” These emissions are the result of the extra electricity – often generated from fossil fuels – required to compensate for grid losses.

We calculated that worldwide, compensatory emissions amount to nearly a billion metric tons of carbon dioxide equivalents a year, in the same range as the annual emissions from heavy trucks or the entire chemical industry. In surveying 142 countries’ transmission and distribution infrastructures, we also determined that approximately 500 million metric tons of carbon dioxide can be cut by improving global grid efficiencies.

How We Got the Numbers

Most electricity is generated at central power stations and sent through high-voltage transmission lines over long distances before being sent locally over what’s called the distribution network – the poles and wires that connect to end consumers. As power moves through that network, resistance in the metal wires causes heat. That results in some of the energy from the fuel used to produce the electricity to be lost in transit.

To quantify greenhouse gas emissions from this process, we used a method called life cycle assessment. Our analysis goes beyond combustion at the power plant alone. We quantified global emissions from cradle to grave: From fuel extraction through combustion at the power plant, then transmission and distribution to the consumer. Our calculations are based on the electricity mix and transmission and distribution losses unique to each country.

Our study showed that losses are highly variable depending on the country. In 2016, aggregate transmission and distribution losses reached 19% in India and 16% in Brazil. But they were over 50% in Haiti, Iraq, and the Republic of Congo. This means that only half of the electricity generated reached or was billed to the consumers as usable power – the other half was lost en route.

In more developed countries, losses were lower: While the United States experienced 6% losses in 2016, 5% was reported for Germany and Singapore reached 2%. These numbers demonstrate it’s more efficient to transmit power over short distances to large population centers compared to moving power long distances to many dispersed rural customers.

Half Could Be Avoided

The resulting emissions are real, and so are the solutions. But addressing the factors that reduce transmission and distributionlosses is not necessarily a straightforward task.

Technical losses are the simplest to address through the deployment of more advanced technologies and by upgrading existing infrastructure, both for long-distance transmission of power and distribution at the local level. Improvements in transmission can be made, for example, by replacing inefficient wires, using superconductors which reduce resistance in wires, and thus lost energy, and controlling power flow and high-voltage direct current.

Similarly, improvements in distribution can be achieved by better managing the load and distribution of power, as well as how distribution lines are configured. Innovation, such as adopting digital technologies for routing power flows, can also play a role.

Solutions for nontechnical losses are more challenging, and may only partially cut associated emissions. The causes of high losses are diverse and can originate in, for example, extreme events, such as the hurricanes that struck Haiti and Puerto Rico in recent years, or war, or a combination of weak governance, corruption and poverty, as seen in India. For either type of losses, countries with large shares of fossil fuel generation and the most inefficient grid infrastructure can cut the greatest emissions and reap the largest environmental benefits from reducing transmission and distribution losses.

While our article highlights several important technological solutions – tamper-proof meters, managerial solutions such as inspection and monitoring, and restructuring a power system’s ownership and regulation – these are clearly only small building blocks that help nations achieve a sustainable path.

Surprisingly, very few countries included transmission and distribution losses in their national commitments to reduce greenhouse gas emission as part of the 2015 Paris Agreement. Our analysis found that only 32 countries mention grid efficiency, while 110 mention some form of renewable energy. With a very leaky grid, some of the money spent to add renewable energy sources will be wasted.

As countries plan to ratchet up climate ambitions in 2020, decarbonizing the power sector will play a vital role. We believe that combining low-carbon electricity with an efficient grid will provide a clean power sector that will improve national infrastructure while minimizing climate damages well into the future.

This article is republished from The Conversation under a Creative Commons license. Read the original article here: http://theconversation.com/we-calculated-emissions-due-to-electricity-loss-on-the-power-grid-globally-its-a-lot-128296.