Unease on the Farm Dims Outlook for Deere in 2020

The company on Wednesday cited uncertainty from trade wars and other issues that have led farmers to pull back on machinery purchases. 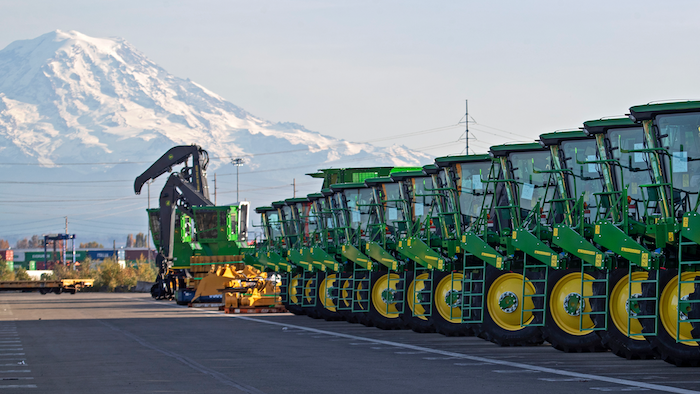 In this Nov. 4, 2019, file photo John Deere tractors made by Deere & Company are shown as they are readied for export to Asia at the Port of Tacoma in Tacoma, WA Deere & Co. reports earns on Wednesday, Nov. 27.
AP Photo/Ted S. Warren, File

Deere’s profit during the fourth quarter dropped 8% and it issued a weak forecast for 2020 as U.S. trade disputes and bad weather squeeze its biggest customer, the American farmer.

It’s the first time that the manufacturer laid out its expectations for next year and it sent shares down almost 4% at the opening bell.

The company expects sales of agriculture and turf machinery to slide 5% to 10% compared with this year, and sales of construction and forestry equipment to fall 10% to 15%.

That outlook, the company said, reflects slowing construction activity, which as been an area of strength.

Quarterly profits were $722 million, or $2.27 per share. Adjusted per share earnings were $2.14, a penny better than expected, according to a survey by Zacks Investment Research.

But that was overshadowed by the first peek into 2020. The Moline, Illinois, company said Wednesday that it expects to book profits of between $2.7 billion and $3.1 billion.

That would be less than the $3.25 billion it made this fiscal year even if it reaches the high end of its guidance.

Farmers have pulled back on buying machinery with so much uncertainty about what comes next in the trade war between the U.S. and China, the world’s two biggest economies.

Farmers in the Midwest and South whose planting this year was interrupted by wet weather got a break in the fall, though a few Northern states have seen harvest prospects go from bad to worse.

Early rain and snow in Minnesota and the Dakotas hampered an already difficult harvest.

Deere has focused on factors it can control and May said despite a tough environment right now, the longer-term outlook for the company is healthy.

“We are committed to the successful execution of our strategic plan and have initiated a series of measures to create a leaner organizational structure that can operate with more speed and agility,” May said in a prepared statement.

President Donald Trump began imposing punitive tariffs on Chinese exports about a year and half ago.

Since then, tariffs have been raised by both sides on billions of dollars’ worth exports from each country, squeezing farmers and manufacturers.

The U.S. Department of Agriculture has set aside nearly $16 billion in aid for farmers for the current crop year to help offset some of the losses caused by the trade war.

But there is confusion about the state of trade relations between the two economic powerhouses.

On Tuesday, China’s Commerce Ministry that said negotiators for both sides had spoken on the phone and agreed to more talks aimed at reaching a deal. On the same day, President Donald Trump said the two side were “in the final throes of a very important deal.”

Why John Deere is at a Gadget Show in the Desert