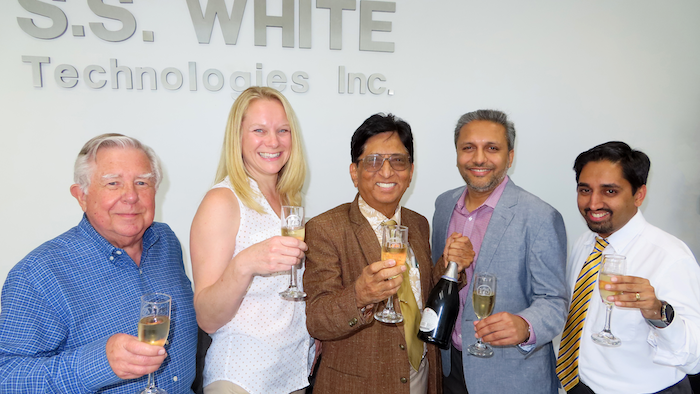 S.S. White Technologies, the world leader in flexible shaft technology, is proud to announce it is celebrating its 175th anniversary year.

Founded by Dr. Samuel Stockton White in 1844 as an artificial tooth factory and growing to become the largest dental manufacturing company in the world, the company patented high-speed flexible shafts used in its White dental engines in 1874. The unique flexible shaft technology later became the company’s focus, used in numerous industrial and automotive applications.

Current president and CEO Rahul Shukla began his career at S.S. White as a full-time summer quality inspector in 1973, working his way up to draftsman, methods engineer, manager of industrial engineering, and later to director of research and development. In 1988, when S. S. White’s parent corporation put the company up for sale, Shukla liked the product so much that he bought the company, focusing it on flexible shaft technology and surgical instruments. He is among the world’s foremost authorities on flexible shaft design.

Under Shukla’s leadership, and after conducting years of research and experiments, S.S. White developed precise mathematical formulas governing the performance of flexible shafts. Shukla used the formulas to develop an industry-leading computer-modeling program for designing flexible shafts to microscopically precise parameters. In 1990, S.S. White released the proprietary PERFLEXION software, which allows engineers to fully model the behavior of all wires within a shaft and optimize for flexibility while minimizing torsional deflection with 20-30% improvement over industry standards.