"Pattern bargaining" means the UAW will use the GM deal as a template, which could be a problem for both companies. 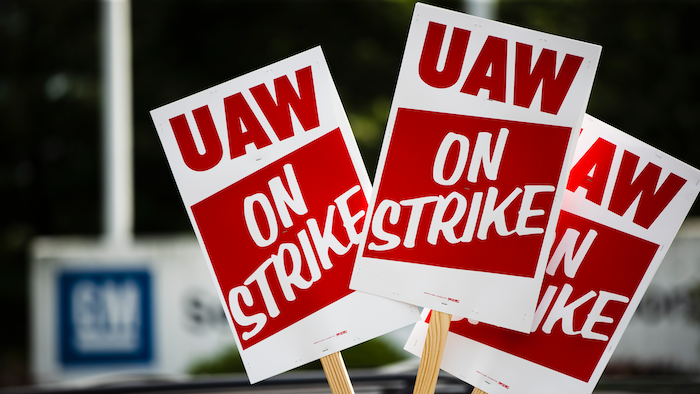 DETROIT (AP) — Just after workers ratified a new contract with General Motors last week, the president of the United Auto Workers union put out a statement that Ford would be next for "pattern bargaining."  That pattern means the UAW will use the GM deal as a template in its talks with Ford, and Fiat Chrysler after that. But it could end up being a problem for both of those companies.

GM gave out pay raises and a huge signing bonus, and it didn't change the union's top-notch health care that costs members little. In return it won millions in savings because it was able to close three factories that made slow-selling cars and parts. Here are some questions and answers about what's facing Ford, which began its negotiations in earnest Monday, and later Fiat Chrysler:

What Will Ford and Fiat Chrysler Object to in the Contract with GM?

GM agreed to raise pay of workers hired after 2007 to top production wages of over $30 per hour within four years. Those workers started around $17 per hour in a concession the union made to reduce labor costs when all three companies were in financial trouble. Both Ford and Fiat Chrysler have more new hires than GM, so the raises will be more expensive for the crosstown rivals, especially Fiat Chrysler. GM has just over 17,000 of the "in-progression" workers, but Ford has 18,500 and FCA has over 20,000.

Ford and Fiat Chrysler also are likely to seek smaller signing bonuses than the $11,000 per worker that GM agreed to, which is expected to cost the company more than a half-billion dollars. It's unlikely either Ford or Fiat Chrysler will be able to change four percent lump-sum payments to older workers in the first and third years of the four-year deal, and three percent pay raises in years two and four.

Why Did GM Agree to these Payments?

The union's 40-day strike against GM influenced the contract terms because it cost the company production of 300,000 vehicles and over $2 billion in lost profits, analysts say. But GM got some wins, mainly the ability to close three car and transmission factories in Lordstown, Ohio; Warren, Michigan; and near Baltimore. GM will build battery cells for electric vehicles at a new plant in the Lordstown area, but it will be run by a joint venture and will pay workers far less than GM pays assembly plant workers.

Art Schwartz, a former GM labor negotiator who now runs a consulting business, said the contract was expensive, but many provisions are for one year only, such as lump-sum payments and the signing bonus. "In collective bargaining, nobody gets everything they want. So you have to prioritize," Schwartz said. "The key thing for GM was the ability to restructure and run the company and follow their future product plan, and they retained that."

Not on most of the bigger economic items, but there can be differences. Ford may want to reduce its engine and transmission manufacturing capacity, but it won't get close to the cost savings that GM got, said Kristin Dziczek, vice president of labor and manufacturing at the Center for Automotive Research, an industry think tank. Ford and FCA can argue that they're not in as good of financial shape as GM, so the signing bonus should be smaller. The companies have paid different signing bonuses in the past, Dziczek said.

GM also agreed not to change its 49,000 union workers' health insurance, so they'll still pay about three percent of the overall cost. Workers at most big U.S. companies pay closer to 30 percent.

Health care is a big reason why Detroit automakers have higher labor costs than non-union U.S. plants run by foreign automakers. Ford and Fiat Chrysler won't be able to change the costs, although they might be able to get workers to take steps that make them healthier, such as having them see a primary care physician to get treatment before problems get worse and they end up in a hospital emergency room, Dziczek said.

Will There be Another Strike?

It largely depends on how far Ford or Fiat Chrysler want to depart from the GM agreement. "I don't want to predict it, but it's not off the table in any sense," said Dziczek.

There's also the federal corruption investigation within the UAW that has implicated the current and previous union presidents, which could test the faith of members in their leadership. That's especially true at Fiat Chrysler, where a now-deceased UAW vice president took hundreds of thousands of dollars in payments from a company-funded training center.