Documents show CEO Parker was aware of experiments being conducted on employees and athletes at an elite training facility bankrolled by Nike. 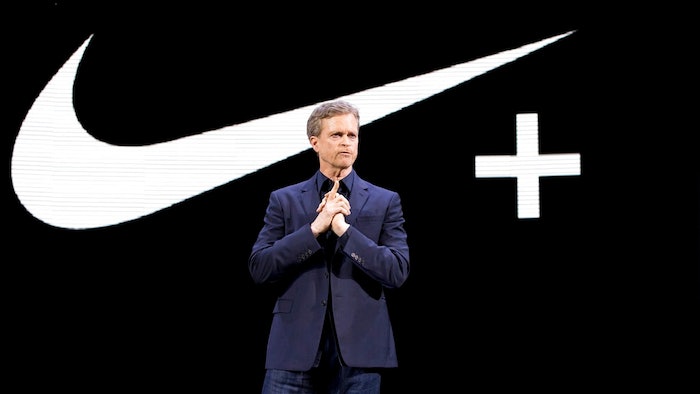 In this March 16, 2016, file photo Nike CEO Mark Parker speaks during a news conference in New York. Parker has found himself at the center of doping scandal that has brought down renown track coach Alberto Salazar, who ran an elite training program bankrolled by the world’s largest sports apparel company.
AP Photo/Mary Altaffer, File

NEW YORK (AP) — Nike CEO Mark Parker’s involvement in a doping scandal that brought down renowned track coach Alberto Salazar raises questions about whether the company, or Parker, will face any repercussions.

Salazar and a doctor received a four-year ban from the sport from the U.S. Anti-Doping Agency for possessing and trafficking testosterone while training top runners at the Nike Oregon Project, an elite training program bankrolled by the company. Salazar is appealing the decision.

Documents released by the USADA show Parker was aware of experiments that the coach and doctor conducted on employees and athletes, and even Salazar’s own sons, to test how supplements and medicine could enhance performance without breaking anti-doping rules. Parker said he never had any reason to believe the tests violated doping rules.

Here are some questions and answers about the controversy and the possible implications for Nike, the world’s largest sports apparel company.

WHAT WAS PARKER’S INVOLVEMENT?

Parker was briefed on Salazar’s experiments, according to emails referenced in reports released by the U.S. Anti-Doping Agency. Dr. Jeffrey Brown, an endocrinologist who worked with the Nike Oregon Project, updated Parker on an experiment Salazar was conducting on his sons with testosterone gel. Parker showed keen interest in his response.

“It will be interesting to determine the minimal amount of topical male hormone required to create a positive test,” Parker wrote.

Parker was included in other email exchanges between Salazar and Brown about the experiments.

HOW HAS NIKE RESPONDED?

Nike has vehemently defended both Salazar and Parker. The company has emphasized that none of the athletes in the Oregon Nike Project has tested positive for drugs. It has noted that the arbitration panel found Salazar never intended to violate doping rules, instead taking pains to comply with the world anti-doping code. The panel said Salazar made “unintentional mistakes.”

In an open letter to Nike employees, Parker said the tests on Salazar's sons were not done to figure out how to cheat but were part of a plan to prevent potential sabotage against Salazar's runners. Parker said that he wanted to understand what was going on.

"Nike did not participate in any effort to systematically dope any runners ever; the very idea makes me sick," Parker wrote.

WHAT IS THE RELATIONSHIP BETWEEN NIKE AND SALAZAR?

It’s no secret that Salazar is close with Nike’s executives. There is even building in Nike’s headquarters named after him.

The star coach teamed up with Tom Clarke, currently president of Nike Innovation, to launch the Nike Oregon Project in 2001, conceiving of the idea as the pair bemoaned the state of American distance running over lunch one day. Nike writes the contracts and pays the athletes in the training program, which is located at the Nike campus in Beaverton, Oregon. The program has been massively successful, its athletes winning several events at the world track and field championships this week.

Nike’s identity is rooted in track and field. Company founders Phil Knight and Bill Bowerman were both track guys: Bowerman as a coach and Knight as an athlete at the University of Oregon. Parker, for his part, was a competitive runner at Penn State University, and his passion for the sport is well-known.

WHAT IS NIKE’S TYPICAL INVOLVEMENT WITH SPONSORED ATHLETES?

It’s to be expected that Nike would stay on top of the health and training of its sponsored athletes, who promote its products in exchange for training funding, free shoes or other equipment, said Bob Dorfman, a sports marketing analyst and creative director at Baker Street Advertising. Sponsorship contracts are often tied to an athlete’s performance.

“Athletes and their agents have tight relationships with their shoe companies, their equipment companies,” Dorfman said. “The sponsorship dollars hinge 100% on their performances, so I would think, yes, there would be a considerable amount of informational trade-off between athletic coaches and their sponsors and agents.”

Still, it’s “a little weird” for Nike’s chief executive to be so intimately involved, particularly since the discussion involved performance-enhancing drugs, Dorfman said. “It’s surprising that it would get that high up.”

HOW DOES THIS CONTROVERSY COMPARE TO PREVIOUS ONES INVOLVING NIKE?

Nike has a long history of sticking by athletes engulfed in controversy, from Tiger Woods to Colin Kaepernick, but the company has generally been able to distance itself when necessary.

Most prominently, Nike dropped Lance Armstrong in 2012 after the cyclist admitted to using banned drugs. The company discontinued products for his Livestrong cancer charity and erased his name from its fitness center in the Beaverton campus. Nike, which had defended Armstrong for years, said the company had been “misled” for a more than a decade.

That claim would be harder to make in the Salazar case given Parker’s knowledge of what was going on.

“It has to be, deny, deny, deny, at this point, or they run the risk of incriminating themselves,” Dorfman said.

Other controversies related to internal corporate culture and governance have plagued Nike. Allegations of misconduct and gender discrimination led to a leadership shakeup at the company in 2018. Earlier this spring, Nike announced changes to its contract policies after the New York Times published opinion articles and videos from female runners saying they risked losing pay if they became pregnant.

There are few signs so far that the controversy has resonated much among shoppers or investors.

Shares of Nike closed at a high of $92.28 Tuesday as news emerged about Parker’s emails emerged, and the price has barely budged since, closing at $92.22 Thursday. Nike stock is up about 16% since the start of the year.

Past scandals have had little effect on Nike’s sales, which have only surged after the brand put former NFL quarterback Colin Kaepernick at the center of its “Just Do It” ad campaign.

A doping scandal is different. But with Nike’s intentions open for debate, it may not resonate “unless it becomes a chronic problem in the eyes of consumers,” said David Carter, a professor of sports business at the University of Southern California. “We haven’t seen that.”

WHAT WILL HAPPEN TO PARKER?

That remains to be seen, but Parker’s direct involvement could make it difficult for Nike’s board of directors to ignore, said Erik Gordon, a law and business professor at the University of Michigan.

“It’s a big deal, and it’s something that needs to be discussed at the board level,” he said. “The first step is asking the CEO, ‘tell us everything. We don’t want to learn about anything else from the press.’”

Nike has seen ups and downs under Parker, who joined the company in 1979 as a footwear designer and has been CEO since 2006. In 2017, he took a 70% compensation cut after a rough year for U.S. sales and the company’s stock price. Nike has since recovered, with first quarter earnings last month soaring past expectations.