Despite the number edging down slightly, 58% were upbeat. 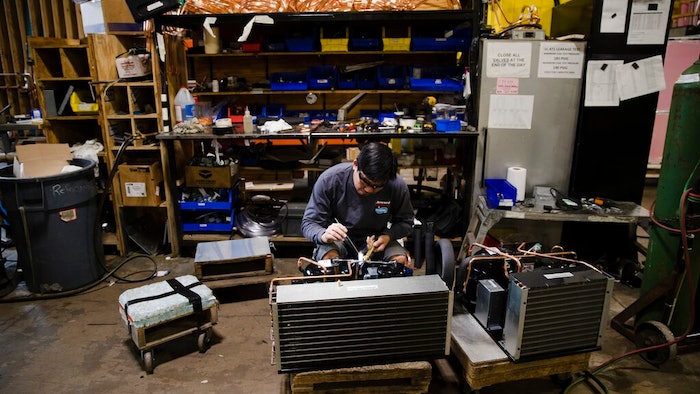 In this Oct. 18, 2018, file photo Minh Pham works on a compressor unit at a commercial refrigeration manufacturing facility in Philadelphia. Small manufacturers and retailers are losing confidence in the national economy yet remain upbeat about their own prospects. That’s the finding of a third quarter survey of 1,000 companies released last week by the U.S. Chamber of Commerce and MetLife.
AP Photo/Matt Rourke, File

NEW YORK (AP) — Small manufacturers and retailers are losing confidence in the national economy yet remain upbeat about their own prospects.

The drop in optimism wasn't surprising given the challenges both industries face. Manufacturers have contended with the Trump administration's tariffs on imports from China, and that country's retaliatory tariffs on U.S.-made goods; the duties have raised expenses for manufacturers and have also depressed revenue for some companies. Retailers are also dealing with tariffs on Chinese-made goods and are seeing consumers becoming more cautious as the economy has shown signs of weakening this year.

Overall, companies that participated in the latest survey were about as optimistic about the economy as they were during the second quarter; 58% were upbeat edging down from 59%.

Despite their dip in confidence, 65% of manufacturers reported their health as good, little changed from 66% during the second quarter. And 59% of retailers said their health was good, up from 55%.

Nonetheless, these businesses are cautious. Seventeen percent of manufacturers and 18% of retailers said they hired more workers in this quarter, compared to 24% of service companies.

Manufacturers have become significantly more conservative about investing in their companies, an understandable reaction as they've seen business weaken. Twenty-three percent of those surveyed said they planned to invest, down from 35%. The number of retailers with investment plans edged up to 25% from 24%.

The view of manufacturing is in line with monthly surveys by the Institute for Supply Management, a trade group for corporate purchasing executives. The ISM manufacturing reports have shown slowing production due in part to the impact of the trade wars.

The Chamber of Commerce/MetLife survey was conducted from June 28 through July 25.