He will enter an "Alford plea" to felony drug possession charges, and will make a $1 million donation to an unspecified drug treatment and rehabilitation program. 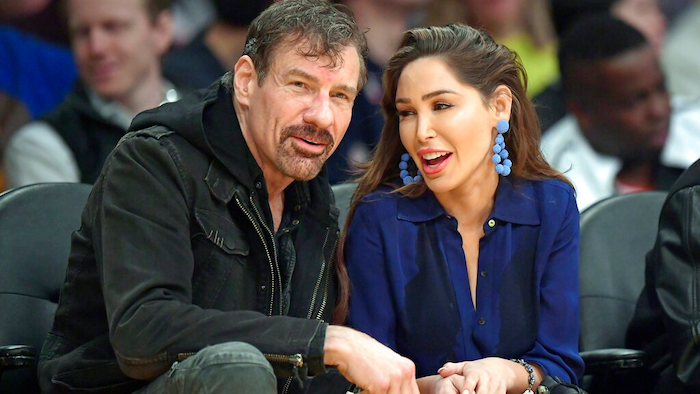 This March 6, 2019, file photo shows Henry Nicholas III, left, and Ashley Fargo during the second half of an NBA basketball game between the Los Angeles Lakers and the Denver Nuggets in Los Angeles. Attorneys for Nicholas and Fargo told a judge in Las Vegas on Wednesday, July 31, 2019, they'll take a plea deal that will spare them prison time in a Las Vegas Strip hotel room drug case.
AP Photo/Mark J. Terrill, File

LAS VEGAS (AP) — A California technology billionaire and crime victim rights advocate and a friend are taking a plea deal sparing them prison time in a Las Vegas Strip hotel room drug case, their lawyers and a prosecutor told a judge on Wednesday.

Prosecutor Brad Turner said he will drop five more serious drug trafficking charges, which stemmed from the amount of heroin, methamphetamine, cocaine and several psychedelic substances that police reported finding in hard-sided travel cases in their room in August 2018.

Nicholas had been locked out of the room at the Encore at Wynn Las Vegas, police have said, and Wynn Resorts security officers who broke through the latched door found Fargo "unresponsive" with a semi-deflated balloon in her mouth and a nitrous oxide gas canister in the room.

A police officer said he believed Fargo used the balloon to inhale nitrous oxide, commonly referred to as laughing gas, and Nicholas told police he brought the canister aboard his private jet to Las Vegas for "recreational use," according to an arrest report. Possession of nitrous oxide is not illegal.

Nicholas told police that he and Fargo had been partying at a strip club before he was locked out of the room.

Both he and Fargo denied ownership of the luggage containing drugs including marijuana, police said.

Nicholas and Fargo were not in court Wednesday but were scheduled to appear Aug. 9 to enter their pleas. Both live in the Newport Beach, California, area and defense lawyers denied any suggestion that they might have been dealing drugs.

"By no stretch of the imagination would anyone consider Dr. Nicholas or Ms. Fargo to be traffickers distributing drugs into the community," Chesnoff and co-counsel Richard Schonfeld said in a statement with attorney David Brown, representing Fargo.

Nicholas, 60, founded Broadcom in 1991 with a partner in a Southern California condominium, got a Ph.D. in electrical engineering from UCLA in 1998 and retired in 2003 from the publicly traded computer software, semiconductor and infrastructure company. Forbes estimates his net worth now at more than $4 billion.

He was indicted in California in 2008 on federal securities and drug charges, but the charges were dismissed in 2010 after a judge cited misconduct and witness intimidation by prosecutors. Nicholas had been accused of providing methamphetamine and ecstasy to business executives.

Chesnoff and Turner told the judge in Las Vegas on Wednesday that Nicholas has no criminal record.

The Las Vegas case will be dismissed after one year if Nicholas and Fargo complete 250 hours of community service and twice monthly personal drug counseling. If not, they will face sentencing on drug possession charges with possible sentences of probation or up to four years in prison.

They argued that no one could prove ownership of the two travel cases found in the room where Brown contends that Fargo was asleep, not unconscious, and woke up after Wynn Resorts security officers broke through the latched hotel room door.

The attorneys argued that people entered and left the hotel room over a period of several days after Fargo checked in and before Nicholas arrived.

The document did not address a police report saying hotel video showed a man and a woman who appeared to be Nicholas and Fargo each carrying a black hard-sided, airtight protective case about an hour before Fargo was found in the room.

Nicholas' attorneys have emphasized his philanthropy and backing for the California crime victim advocacy law named for his sister, Marsalee "Marsy" Nicholas. She was stalked and killed by an ex-boyfriend in the 1980s.

Eleven U.S. states including Nevada now have a version of the law, which aims to codify rights for crime victims and their families to confer with prosecutors and attend court proceedings.

In Nevada, the law expanded the definition of a victim and listed 16 victim rights including privacy, protection from defendants, refusal to be interviewed by defense attorneys without court orders and "full and timely restitution."

Marsy's Law for All, a campaign lobbying for similar laws in more states, praised what it called the "conclusion" of Nicholas' criminal case, saying in a statement on Wednesday that he still leads the organization.