Plunging revenue has the company considering a temporary production shut down. 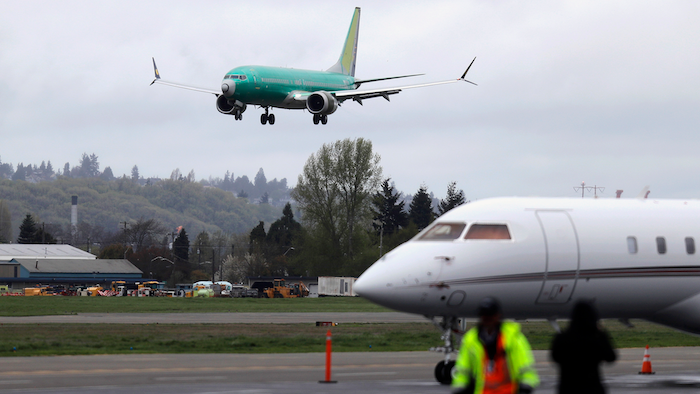 DALLAS (AP) — Boeing's CEO says the company will consider temporarily shutting down production of the 737 Max if the plane's return is significantly delayed beyond the company's October forecast. The comment by Chairman and CEO Dennis Muilenburg underscores the uncertainty swirling around the company and its best-selling plane, which has been grounded since March after two deadly crashes.

Boeing reported Wednesday that it suffered its biggest quarterly loss in at least two decades, nearly $3 billion, as it absorbed financial damage caused by the Max. Revenue plunged 35 percent after Boeing halted deliveries of any new Max jets.

The huge second-quarter loss was expected. Boeing removed much of the suspense from earnings day when it announced last week that it would take a $4.9 billion after-tax charge for the Max. The charge was calculated from Boeing's estimate of the cost of compensating airlines for lost use of their Max planes for several months. It did not include Boeing's potential liability from dozens of lawsuits filed by relatives of the 346 passengers who died in the two crashes.

Boeing is updating U.S. and foreign regulators daily on its work to fix the plane. Based on those discussions, the company said last week that it expects the Max to resume flying early in the fourth quarter.

The Max assembly line near Seattle has stayed open, although at a reduced rate. The company even hopes to boost production gradually from the current 42 a month to 57 a month next year, but that assumes the plane will fly and Boeing will soon resume deliveries to airlines — jets have been piling up in Boeing lots since March.

"If that estimate of (an October) return to service substantially changes, then we'll have to consider alternatives," Muilenburg told analysts. "Those alternatives could include different production rates, they could include a temporary shutdown of the line."

Muilenburg's comments implied that the Federal Aviation Administration can review the company's changes to flight-control software in one month. The FAA has already been analyzing much of Boeing's work. An FAA spokesman said the agency has no preconceived timeline for returning the Max to service, and will do so only when it determines that the plane is safe.

The grounding of Boeing's plane has caused airlines including American, United and Southwest to cancel thousands of flights into early November. A pause in Max production would hit Boeing assembly workers and the company's suppliers, including engine maker General Electric.

The Max saga is already dinging durable-goods orders and U.S. exports. Orders for U.S. non-defense aircraft and parts fell 39.4 percent in the first five months of 2019, compared with the same period last year, according to Commerce Department figures. Exports of civilian aircraft fell 12 percent in that stretch, a drop of nearly $2.8 billion.

Treasury Secretary Steven Mnuchin weighed in on the importance of fixing the Max, which was designed to compete with a plane built by Europe's Airbus. "There is no question this is very important to us," he said on CNBC. "We compete, Boeing versus Airbus, every day."

The huge charge for the Max caused the quarterly numbers to mean less than usual. Some analysts excluded the charge from their forecast of earnings per share, while others did not, making it difficult if not impossible to judge whether Boeing met, beat or fell short of Wall Street expectations.

Boeing is working to complete changes in flight-control software on the 737 Max that was implicated in the fatal crashes. The company said it is testing the final software changes that it will submit to the FAA for approval.

Some relatives of passengers who died in the crashes — one off the coast of Indonesia in October, the other in Ethiopia in March — have urged Boeing and regulators to scrap the plane. They argue that flight-control software called MCAS is a bandage meant to cover a plane that was more prone to aerodynamic stalls because of the larger size and forward position of its engines compared to previous Boeing 737s.

Among those calling for ditching the plane are longtime consumer crusader Ralph Nader, whose grandniece died in the Ethiopia crash, and Paul Njoroge, a Canadian who told a congressional panel this month about losing his wife, three children and mother-in-law on the same flight.

Even after the second crash, those in the airline industry, including CEOs and pilots, have never wavered in their certainty that the plane will fly again. It has taken far longer than most expected, however, for Boeing to produce a fix for the flight-control system that activated when it should not have on the two flights that crashed.

"There is some frustration, but the general sense I get from the membership is they don't want anything rushed either," said Eric Ferguson, new president of the American Airlines pilots' union. "We will get that airplane back in the air when the time comes, not any sooner."

Separately, Boeing on Wednesday announced that the first flight of its 777X jumbo jet will be delayed until next year instead of late this year because of problems with the General Electric engines. Boeing still aims to deliver the first planes to airlines in late 2020.