Orders for Large Manufactured Goods Up 2% in June

A category that serves as a proxy for business investment rose 1.9%, its best showing since February. 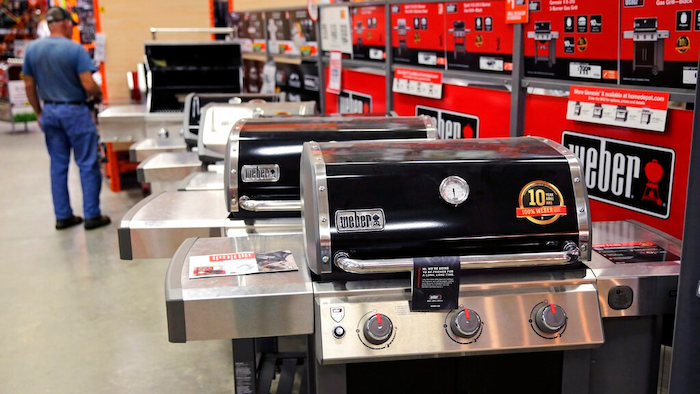 In this July 11, 2019, photo Weber grills are displayed at the Home Depot store in Londonderry, N.H. On Thursday, July 25, the Commerce Department releases its June report on durable goods.
AP Photo/Charles Krupa

Orders for durable goods — or items meant to last at least three years — rose 2% in June, the Commerce Department said Thursday. That's after a 2.3% decline in May and an even bigger 2.8% drop in April.

Some hopeful news on the U.S.-China trade dispute came Wednesday when Treasury Secretary Steven Mnuchin told reporters that U.S. Trade Representative Robert Lighthizer will meet with Chinese leaders next week in Shanghai. Mnuchin said he expects several meetings before any deal is done — including more in Washington.

Aircraft orders, typically a volatile category, jumped about 75%, after falling more than 50% in May and almost 40% in April. Orders for cars and auto parts increased 3.1%, its biggest increase since July of 2018. That's good news for automakers, who have struggled to sell new cars this year.

Excluding aircraft, cars, and other transportation equipment, orders increased 1.2% — the biggest gain since April of last year — another potentially good sign for an economy that's expected by many to grow more slowly the rest of the year.

The U.S. economy grew at a solid 3.1% annual rate in the January-March quarter — a pace that may prove to be the high mark for 2019. The first estimate for second quarter GDP — the April-June quarter — will be released Friday. Most economists believe growth has slowed sharply in the current April-June quarter to less than 2%, in part due to ongoing trade disputes.