Roger Hogan alleged Toyota retaliated against him after he began raising safety concerns about the Prius electric power system in 2017.

The Los Angeles Times says an Orange County jury decided Monday that Toyota had breached "good faith and fair dealing" with Roger Hogan, who has dealerships in Claremont and San Juan Capistrano.

Hogan alleged Toyota retaliated against him after he began raising safety concerns about the Prius electric power system in 2017. The jury specifically ruled on Hogan's claim that a 2014 Prius recall didn't fix defects.

The company still faces a lawsuit in Los Angeles that says its recalls failed to fix Prius defects. 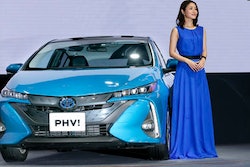 Prius Too Dangerous for U.S.