Preliminary results show 833 employees voted against representation and 776 voted for it. 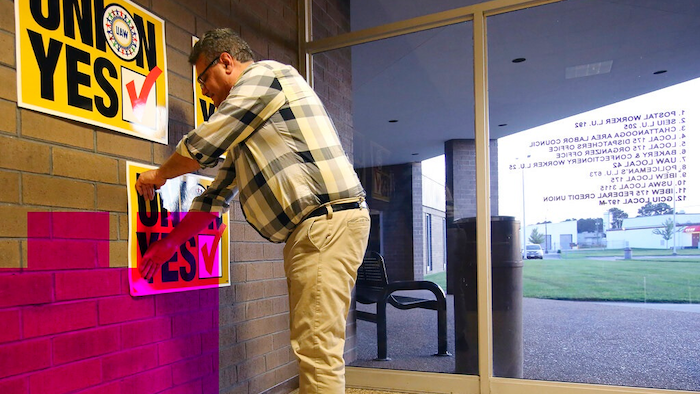 Brian Rothenburg with the United Auto Workers places signs at the International Brotherhood of Electrical Workers, Friday, June 14, 2019 in Chattanooga, Tennessee. Workers voted against forming a factory-wide union, handing a setback to the United Auto Workers’ efforts to gain a foothold among foreign auto facilities in the South.
Erin O. Smith/Chattanooga Times Free Press via AP

CHATTANOOGA, Tenn. (AP) — Workers at Volkswagen's plant in Chattanooga, Tennessee, voted Friday night against forming a factory-wide union, handing a setback to the United Auto Workers' efforts to gain a foothold among foreign auto facilities in the South.

The vote of hourly workers began Wednesday and concluded Friday. Preliminary results show 833 employees voted against representation and 776 voted for it, the German automaker said in a statement. VW said about 93% of the roughly 1,700 eligible employees voted.

"Our employees have spoken," Frank Fischer, president and CEO of Volkswagen Chattanooga, said in the company statement.

He said results are pending certification by the National Labor Relations Board and legal review. Fischer said the company looks forward to "continuing our close cooperation with elected officials and business leaders in Tennessee."

Volkswagen has union representation at all of its other major plants worldwide.

A win in Chattanooga would have offered the United Auto Workers its first fully organized, foreign-owned auto assembly plant in the traditionally anti-union South. UAW officials have questioned why Chattanooga should differ from Volkswagen's other union-represented plants worldwide, or Spring Hill, Tennessee's General Motors plant with 3,000 UAW-represented workers.

UAW organizing director Tracy Romero said she was proud of the pro-union voters at the plant.

"The company ran a brutal campaign of fear and misinformation," Romero said in a statement, adding that the automaker tried to make workers afraid of losing the plant and suffer other repercussions.

In April, Gov. Bill Lee drew cheers and jeers when he told VW employees in a closed-door meeting that he believes "when I have a direct relationship with you, the worker, and you're working for me, that is when the environment works the best," according to a recording obtained by Labor Notes, a pro-union publication.

In 2014, Volkswagen workers in Chattanooga voted 712-626 against unionization through the Detroit-based UAW, heeding the advice of then-U.S. Sen. Bob Corker, then-Gov. Bill Haslam and other GOP officials who urged a "no" vote.

During that election, Corker waited until voting had actually started at the plant in his hometown when he all but guaranteed that the company would announce within two weeks of a union rejection that it would build a new midsized SUV at its only U.S. factory, instead of sending the work to Mexico.

Volkswagen announced a new SUV would be produced in Chattanooga five months after the vote, essentially confirming Corker's prediction but on a different timeline.

UAW claimed "interference by politicians and outside special interest groups" swayed the 2014 election. The union ultimately dropped an appeal of that vote

After the loss, a smaller bloc of Chattanooga workers voted for union representation in 2015, but Volkswagen refused to bargain with them unless all hourly workers had a vote. Instead of dragging out the fight over the smaller group, the union was granted this week's vote.

Other than the smaller vote at Chattanooga, the UAW has not fully organized a foreign-owned auto assembly plant in the South. A 2017 vote at the Nissan plant in Canton, Mississippi, failed by a wide margin .

Even with recent losses at VW and Nissan, the UAW won't stop trying to organize assembly plants in the South owned by international automakers, said Kristin Dziczek, vice president of labor, industry and economics at the Center for Automotive Research, an industry think tank in Ann Arbor, Michigan.

"It's never the end," she said before the vote. "Win or lose, it's hard to organize."

Union organizing is more difficult in the South because it doesn't have the pro-union culture of the north, and because politicians and other third parties often campaign against the union, she said.

A big Volkswagen project is now looming for Chattanooga: An $800 million expansion is expected to create 1,000 jobs for electric vehicle production beginning in 2022. It's set to receive $50 million in state incentives.

The state's economic development department has received no indication that the project would somehow hinge on the union vote, said department spokesman Scott Harrison.

UAW is calling on Congress to take a comprehensive look at the country's labor laws and NLRB rules following the vote, the union said in its statement.