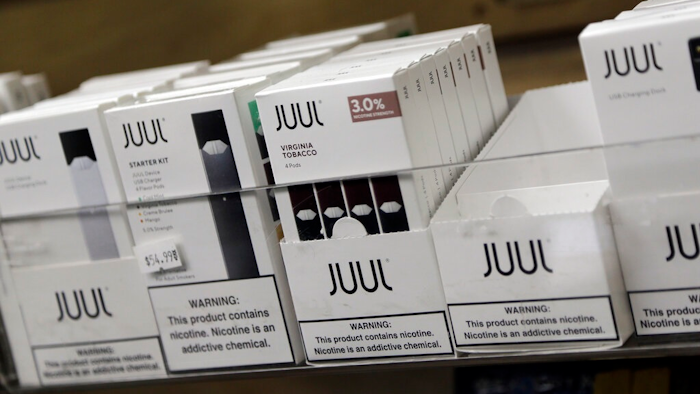 "Juul entered the market with the highest nicotine potency of any product," Stein said. "Meanwhile Juul understated the strength of the nicotine in each pod, downplaying its risks."

Juul, which launched in 2015, now controls nearly three-quarters of the $3.7 billion-dollar retail market for e-cigarettes. The explosion of underage vaping has alarmed public health officials and lawmakers. Last year, one in five U.S. high school students reported vaping in the previous month, according to a government survey .

Stein said Juul's use among teens is higher than Juul's supposed targeted demographic. He said that's probably because of marketing practices aimed at young people, such as using "fruit and dessert-like flavors that serve to entice children to the product."

Holding up a Juul device, he pointed out that it looked like a flash drive, "making it cool and easy to hide."

When 16-year old Luka Kinard first tried vaping as a freshman at High Point Central High School in High Point, North Carolina, a city outside of Greensboro, he didn't realize how dangerous the popular activity at his school could be.

Kinard said he suffered health impacts as a result of a year and a half of vaping, including stunted growth, weight loss and a seizure. Since he quit vaping last October, he said he has put on 20 pounds (9 kilograms) and grown 3 inches (7.6 centimeters) taller.

His mother, Kelly Kinard, said she also noticed extreme behavioral changes in her son after he started vaping, including angry outbursts, a loss of interest in activities, falling grades and high anxiety. So she sent him to a rehabilitation treatment program in California.

"I sent him because he had a substance abuse problem. The substance was Juul," she said.

The use of Juul among young people in the state has skyrocketed, with about 17 percent of high schoolers using it, said Dr. Susan Kansagra with the North Carolina Division of Public Health.

A spokesman for Juul Labs said in an emailed statement that the company is concerned about youth vaping and is working to reduce the practice.

"We stopped the sale of non-tobacco and non-menthol based flavored JUULpods to our traditional retail store partners, enhanced our online age-verification process, strengthened our retailer compliance program with over 2,000 secret shopper visits per month, and shut down our Facebook and Instagram accounts," the statement read.

Candy and fruit flavors of Juul are still available online. The company considers mint a menthol-based flavor, so it is still sold in stores. That's been a point of contention for anti-smoking activists who say mint is one of the most popular e-cigarette flavors among teens. Stein's lawsuit asked a judge for a statewide ban on the online sale of all flavors besides menthol and tobacco, including mint.

He also asked the court to prohibit Juul from using marketing and advertising practices known to appeal to minors within the state, including sponsoring sporting, entertainment or charity events, and to prohibit the company from advertising within 1,000 feet of schools and playgrounds.

Stein acknowledged the changes Juul has made in the past few months after facing pressure from the Food and Drug Administration but pointed out that these are voluntary measures that the company can countermand at any moment.

"That's why I want a court to order Juul to stop selling, to stop marketing, and to stop distributing to young people," he said.

Facing increasing scrutiny about underage smoking, Juul has recently launched a multimillion-dollar television ad campaign re-branding itself as an aid for adults trying to kick traditional cigarettes. But anti-smoking experts and activists say the company is making unproven claims for its product. They have urged the FDA to investigate the company's marketing efforts.

Neither Juul nor any other e-cigarette has been approved by the FDA to help smokers quit.