The new assembly plant is expected to add 3,850 jobs. 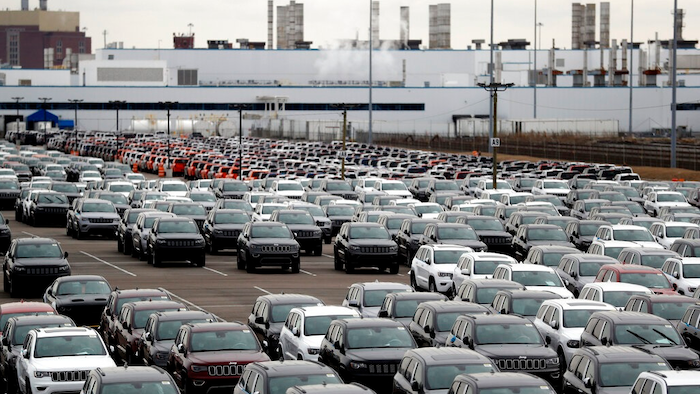 In this Feb. 26, 2019 file photo, Jeep vehicles are parked outside the Jefferson North Assembly Plant in Detroit. Land deals that will allow Fiat Chrysler to build a new assembly plant in Detroit are expected to cost the city and state about $107 million. Mayor Mike Duggan released details Friday of agreements reached for nearly 215 acres on the city's east side that the automaker wants as part of a $1.6 billion investment.
AP Photo/Carlos Osorio

DETROIT (AP) — Land deals that will allow Fiat Chrysler to build a new assembly plant in Detroit are expected to cost the city and state about $107 million.

Mayor Mike Duggan released details Friday of agreements reached for nearly 215 acres (87 hectares) on the city's eastside that the automaker wants as part of a $1.6 billion investment.

Deals have been reached with several major property owners, including 82 acres (33 hectares) from a company owned by the family of businessman Manuel "Matty" Moroun. Moroun also owns the Ambassador Bridge which connects Detroit with Windsor, Ontario, Canada.

About 155 acres (62-hectares) are owned by the city and the Detroit Land Bank Authority.

Duggan said Friday that the property owners "understood the rare opportunity this represents for our city and worked with us throughout this complicated process."

The new assembly plant is expected to add 3,850 jobs. Fiat Chrysler also plans an additional 1,100 new jobs at its adjacent Jefferson North Assembly plant to build the Jeep Grand Cherokee and a new, three-row, full-size Jeep SUV and plug-in hybrid models for all.

The automaker announced its plans in February . Detroit had 60 days to assemble land for the project. Most of the needed land would be for expanding the footprint of the existing facility, parking and other uses.

If the land acquisition plan is approved by the City Council, the site would be prepared and construction of the new plant could start later this year.

It would mark the first time in nearly 30 years that a new auto assembly plant was built in Detroit.

"We look forward to working with City Council, state of Michigan and the Michigan Strategic Fund Board as they consider the merits of this deal, which will create thousands of good-paying, union jobs and expand our manufacturing footprint in the state and city we call home," Fiat Chrysler North America Chief Operating Officer Mark Stewart said in a statement.

Duggan's office says Detroit will use $36 million in bond funding, a $7.5 million loan from the city's Brownfield Redevelopment Authority and just over $7 million from the sale of a city-owned garage to buy the land. Another $57 million in grants and loans has been requested from the state.

The deal for the Moroun-owned land was reached Thursday and was the final piece needed for the plan to move forward. Other major parcels belong to power company DTE Energy, the Great Lakes Water Authority and a tree-planting operation.