The modest growth in pay and benefits contained in Tuesday's report suggests that inflationary pressures remain in check. 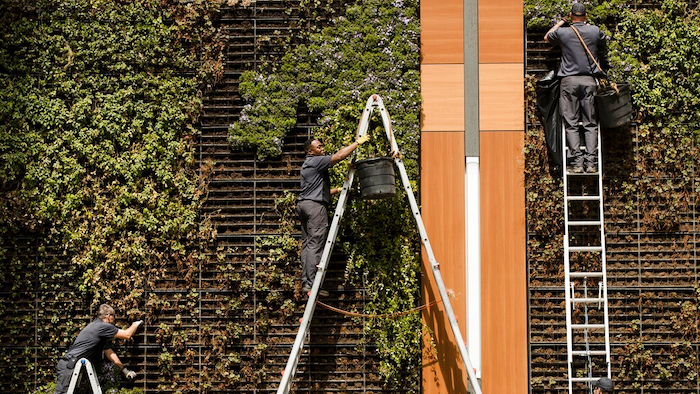 In this April 9, 2019, photo gardeners work on a vertical planters in Philadelphia. On Tuesday, April 30, the Labor Department releases the employment cost index for the first quarter, a measure of wage and benefit growth.
AP Photo/Matt Rourke, File

WASHINGTON (AP) — Wages and benefits for U.S. workers rose 0.7% in the first three months of the year, a modest gain that matched the previous quarter's increase.

The data, released Tuesday by the Labor Department, suggests that growth in workers' compensation has stalled in recent months. In the first quarter, wages and benefits increased 2.8% compared with a year earlier. That's down slightly from a 2.9% annual gain in the final quarter of 2018. Still, workers' compensation has picked up slowly. Five years ago, quarterly gains were closer to 0.4%.

The job market is very tight, with the unemployment rate at 3.8%, near a 50-year low, and there are more open jobs than unemployed workers. That has pushed up wages over time, though the gains aren't as healthy as they were the last time the jobless rate was this low.

Faster pay increases can force companies to raise prices to offset the higher labor costs, which can lead to inflation. The modest growth in pay and benefits contained in Tuesday's report suggests that inflationary pressures remain in check.

Compensation rose more quickly in typically lower-paying occupations and industries than in higher-paying ones. For truckers and other transportation workers, it jumped 1.6%, and for retail workers it rose 1%. Managers' compensation rose just 0.5% and for professional workers, 0.4%. That is a sign employers are struggling particularly hard to find and keep lower-skilled workers.