He says it's "unrealistic" to think the company will employ 13,000 people as originally promised. 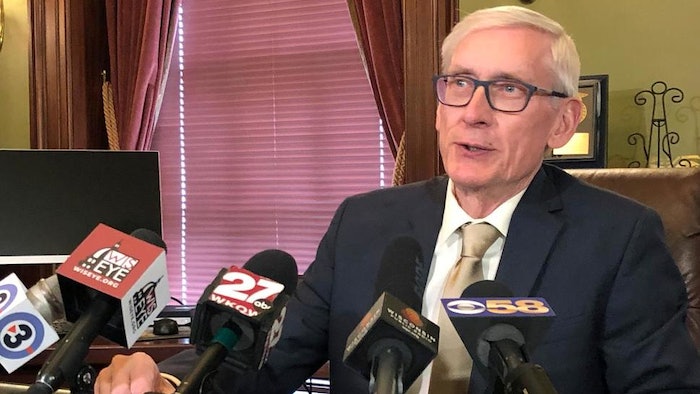 Wisconsin Gov. Tony Evers says he thinks it's "unrealistic" for Foxconn Technology Group to employ 13,000 people in the state and he wants to renegotiate the contract during a news conference Wednesday, April 17, 2019, in Madison, Wisconsin. Evers told reporters that the state was working with Taiwan-based Foxconn to look at revising the original contract for the proposed facility to build liquid crystal display panels because it "deals with a situation that no longer exists."
AP Photo/Scott Bauer

Evers told reporters that the state was working with Taiwan-based Foxconn to look at revising the original contract for the proposed facility to build liquid crystal display panels because it "deals with a situation that no longer exists."

President Donald Trump has touted the Foxconn project in Wisconsin as a sign of the return of manufacturing to the United States. It would be Foxconn's first manufacturing facility outside Asia, but skeptics have questioned the project that was announced more than a year ago.

Under terms of the original deal struck by Evers' predecessor Gov. Scott Walker, Foxconn could get more than $4 billion in state and local tax credits if it employs 13,000 people and invests $10 billion in the state.

That deal was roundly criticized by Democrats, including Evers, as being too favorable for Foxconn. The incentive package was the largest of its kind in U.S. history for a foreign company and the biggest ever in Wisconsin.

Foxconn, the world's largest provider of electronics equipment, has repeatedly insisted that it will meet the original investment and employment targets, even as the scope of the project has been reduced.

Last month, Foxconn said it would begin construction later this year on a Generation 6 factory, where it would produce small screens for cellphones, tablets, televisions and other devices. Foxconn initially said it was going to build a larger Generation 10 plant that would have produced screens three-times as large.

Evers was asked Wednesday if he still thinks Foxconn will employ 13,000 people in the state.

"I think at this point in time that would be an unrealistic expectation when they're downsizing the footprint of what they're doing," Evers said. "So, 13,000 people as Foxconn employees is probably difficult to imagine for me right now."

Evers said he didn't know what a more realistic number would be.

The reduction in the size of the project means changes must be made to the contract that was based on Foxconn building a larger facility, Evers said.

"Clearly the deal that was struck is no longer in play," Evers said. "It's our goal to make sure that the taxpayers are protected and environmental standards are protected and we believe that we need to take a look at that contract and see if it needs to be downsized as a result fix it."

Mark Hogan, the head of Wisconsin's economic development agency that negotiated the Foxconn contract, said he and Evers' top aide have been in "frequent conversations" with the company since it announced plans to build a smaller factory.

Those talks, which include the effect of Foxconn's "evolving plans" on the contract, will continue as construction proceeds, Hogan said.

A Foxconn representative had no immediate comment, but the possibility of rewriting the contract drew criticism from the Republican leader of the Wisconsin state Senate.

"If the state is willing to renege on its commitment to Foxconn and open up a contract without agreement by both parties, then what guarantee can Wisconsin make to any other company that wants to expand here?" Senate Majority Leader Scott Fitzgerald said in a statement.

Assembly Speaker Robin Vos said he was concerned Evers would try to "undermine the state's contract with Foxconn," but he said the deal was "ironclad."

"As Foxconn works to create 13,000 jobs in Wisconsin, I'm open to hearing if any flexibility is needed to achieve that goal, which I hope is the intent of Governor Evers," Vos said in a statement.

Evers also said he didn't think the Wisconsin project would be affected by Foxconn chairman and CEO Terry Gou's decision to run for president of Taiwan. Gou negotiated the deal with Wisconsin officials and has been a frequent visitor to the state.

How Foxconn Deal Could Change