Associated Press
In this Sunday, Feb. 3, 2019, file photograph, an unsold 2019 S75D sits at a Tesla dealership in Littleton, Colo. Tesla's assembly lines slowed down during a rocky start to the new year, which will likely magnify nagging doubts about whether the electric car pioneer will be able to make the leap into mass market.
AP Photo/David Zalubowski, File

SAN FRANCISCO (AP) — Tesla's assembly lines slowed and deliveries fell during a rocky start to the new year that is likely to magnify nagging doubts about the company's ability to post sustained profits.

The Palo Alto, California, company churned out 77,100 vehicles from January to March, well behind the pace it must sustain to fulfill CEO Elon Musk's pledge to manufacture 500,000 cars annually.

The company only delivered 63,000 vehicles in the quarter, down 31% from 2018's fourth quarter. It cited a big increase in vehicle deliveries to Europe and China and "many challenges encountered for the first time."

The lower-than-expected delivery numbers and "pricing adjustments" will take a bite out of Tesla's first-quarter net income, it said. But it said it ended the quarter with sufficient cash on hand.

The first-quarter production figures announced late Wednesday lagged the 86,555 vehicles that Tesla manufactured during the final three months of last year when the company was scrambling to make more cars.

That push helped Tesla post a profit in back-to-back quarters for the first time in its 15-year history.

Musk has acknowledged that Tesla's hopes of becoming a consistent moneymaker are riding on the success of the Model 3 and a sport utility vehicle called the Model Y scheduled to be released next year. And for those vehicles to become hits, Tesla will have to be able to produce them in high volumes.

The company didn't provide further details on how it fared financially during the first quarter. Its quarterly results are expected to be released late this month or in early May.

Tesla attributed the production decline to cancellation of lower-priced versions of the Models S and X, a move the company said was designed to differentiate the more expensive vehicles from the Model 3.

The lower production figures come amid more uncertainty for a company that seems to be caught in an endless cycle of turmoil.

U.S. stock market regulators are accusing Musk of improperly tweeting about Tesla's manufacturing volume in February when he predicted that the company would make about 500,000 cars this year. A few hours later, he backtracked slightly , saying he meant Tesla would be manufacturing about 125,000 cars per quarter by the end of this year, a pace that would translate into 500,000 vehicles annually.

Either way, the Securities and Exchange Commission alleges Musk's tweet violated a court-approved settlement that called for him to have his tweets about Tesla information pre-approved by the company. That requirement is part of a $40 million settlement reached last year after Musk tweeted he lined up the financing needed to lead a buyout of a Tesla, a claim that the SEC asserted was a misleading statement that duped investors.

Musk has vehemently denied his February tweet violated the settlement and is fighting the SEC's attempt to have him held in contempt of court. U.S. District Judge Alison Nathan is scheduled to hear further arguments about the case during a hearing scheduled Thursday in New York. 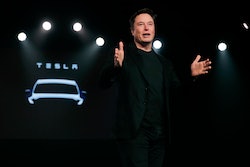 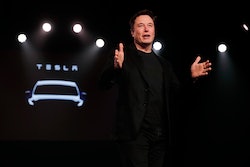