It is one of the largest coal-fired power plants in the West. 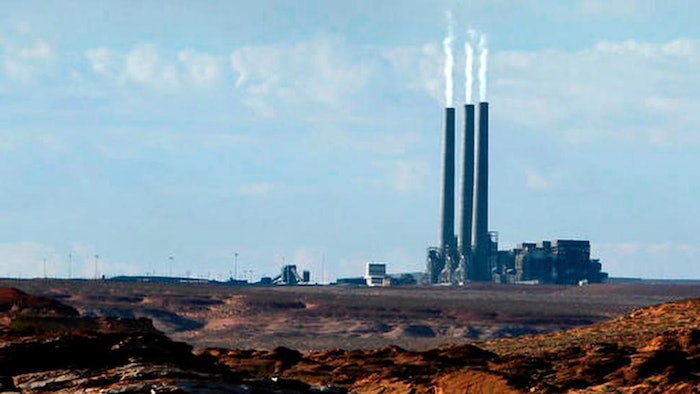 In this Sept. 4, 2011, file photo, smoke rises from the stacks of the main plant facility at the Navajo Generating Station, as seen from Lake Powell in Page, Ariz. The owners of one of the largest coal-fired power plants in the West say negotiations with a tribe to take over the plant have hit an impasse. A Navajo Nation energy company has been talking with owners of the Navajo Generating Station to buy the plant that's scheduled to shut down in December.
AP Photo/Ross D. Franklin, File

FLAGSTAFF, Ariz. (AP) — The owners of one of the largest coal-fired power plants in the West say negotiations with a tribe to take over the plant have hit an impasse.

The Navajo Generating Station on the Arizona-Utah border is scheduled to close in December because of cheaper natural gas prices. It sits on the Navajo reservation where hundreds of tribal members benefit from jobs at the plant and its feed mine in Kayenta. The two combined provide nearly $40 million annually to the tribe in lease payments and royalties.

The Navajo Nation directed an energy company it created to explore the purchase of both the plant and the mine owned by Peabody Energy. But the months-long talks with the power plant's owners came to a halt Wednesday over who ultimately would be responsible for cleanup.

The Salt River Project operates the plant and said the owners want the Navajo Transitional Energy Company to take on any known liabilities, including restoring the land to conditions before the plant began operating in the 1970s, and unknown liabilities. SRP spokesman Scott Harelson said the latter could include changes in regulatory or environmental laws that would affect decommissioning.

"We just don't know, and the owners do not want to expose their shareholders and/or customers to those risks," he said Thursday. "It's not in the best interest of our customers."

The energy company said that pledge is unnecessary because it already has agreed to a performance bond backed by the tribe to help cover the cost of cleanup beyond what the current owners have in an escrow account. It's the same type of bond the company has in place for a coal mine it owns in northwestern New Mexico and partial ownership of the Four Corners Power Plant, chief executive Clark Moseley wrote in a letter to the power plant owners this week.

Moseley suggested Thursday that something else was at play.

"SRP's tactic of immediately announcing decommissioning of the plant confirms our assessment that SRP was merely looking for any excuse to avoid having to conclude this transaction," he said in a statement.

The Salt River Project has said all along it would not veer from its shutdown plans unless the owners reached an agreement to sell the plant. Harelson said its request of the Navajo Nation is no different from what it asked of two companies who proposed buying and operating the plant last year. Those companies abandoned the deal because they could not get anyone to agree to buy the power.

Navajo activists have sided against the tribe's venture to buy the generating station and said the current cleanup and reclamation plans are adequate.

"NGS owners and Peabody have mined and burned coal on Navajo land for 50 years," one of the activists, Nicole Horseherder, said in a statement. "That's generations of contamination they are accountable for cleaning up, and the Navajo Nation should never let them off the hook for that."

Still, the Navajo Transitional Energy Company said it is hopeful negotiations to acquire the power plant will continue. The Navajo Nation Council is scheduled to meet with company representatives for a work session in Phoenix on Saturday.

Harelson said the power plant owners are not part of that discussion.