"No human being should be detained under conditions so harsh that their only plausible purpose is to coerce a confession," she said in a letter. 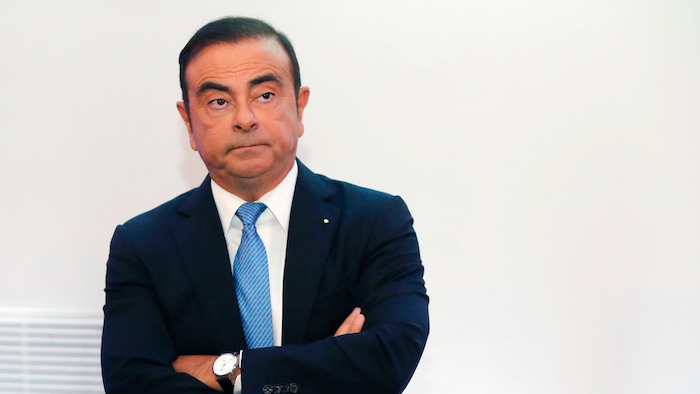 The wife of former Nissan chairman Carlos Ghosn has written a letter to Human Rights Watch, an advocacy group, criticizing his long detention and Japan's criminal justice system as unfair and harsh. Her letter describes how prosecutors interrogate prisoners without a lawyer present in an apparent effort to get a confession - conditions that are routine for suspects in Japan.
Nobutoshi Katsuyama/Kyodo News via AP, File

"My husband's is a case study in the realities of this draconian system," Carole Ghosn wrote in a nine-page letter Monday to the Tokyo branch of the organization.

Carlos Ghosn was arrested Nov. 19 and has been charged with falsifying financial reporting in underreporting his income and with breach of trust in having Nissan Motor Co. shoulder his personal investment losses and make payments to a Saudi businessman.

Ghosn, who led Nissan for two decades and rescued the Japanese automaker from near-bankruptcy, asserted his innocence in a Tokyo court last week. It was his first public appearance since his arrest.

Carole Ghosn's letter describes how prosecutors interrogate prisoners without a lawyer present in an apparent effort to get a confession — conditions that are routine for suspects in Japan. Japan's system has come under fire from international human rights groups, as her letter notes.

Confined to an unheated cell, her husband has lost almost 7 pounds (3 kilograms) in two weeks, with meals of mainly rice and barley, she wrote. He is denied his medication, given 30 minutes to exercise daily and is allowed to bathe two or three times a week, she said.

"No human being should be detained under conditions so harsh that their only plausible purpose is to coerce a confession," said the letter, which cited cases in which people were later found innocent but had been detained for months.

Ghosn's lawyers have complained about the prolonged detention but their appeals have been rejected. Prosecutors say Ghosn is a flight risk and he may tamper with evidence. No trial date has been set.

Carole Ghosn's letter defended her husband's character and his record in the auto industry.

"My husband is well known as a person of unimpeachable honor, honesty and integrity," she said in her letter.

Last week, she issued a shorter statement expressing worries about her husband's health when he had a fever. He has since recovered. Ghosn's family has not been able to meet with him, and so far only lawyers and embassy officials have been allowed visits.

Human Rights Watch Japan Director Kanae Doi, to whom the letter was addressed, declined comment. But she referred to an earlier statement on Ghosn's case and what the group called "hostage justice," the phrase often used by critics of Japan's criminal system.

"Anyone arrested in Japan deserves the basic rights to the presumption of innocence, a prompt and fair bail hearing, and access to counsel, including during questioning," Brad Adams, Asia director of the group, said in the statement, published last week in The Diplomat, a magazine on news and commentary about Asia.

"The evidence will eventually show whether Carlos Ghosn is guilty of the charges against him, but his case has already shown that it is time to end Japan's hostage justice system," Adams said.