The hole could have been drilled during manufacture or while in orbit.

MOSCOW (AP) — Two Russian cosmonauts were preparing to venture outside the International Space Station Tuesday to inspect a section where a mysterious leak has been discovered. The leak was spotted on August 30 in the Russian Soyuz spacecraft attached to the station. The crew quickly located and sealed the tiny hole that created a slight loss of pressure, and space officials said the station has remained safe to operate.

Russian cosmonauts Oleg Kononenko and Sergei Prokopyev will conduct a six-hour spacewalk to inspect the Soyuz's outer surface. They will uncover the thermal insulation covering the patched hole and take samples that will be studied by experts.

Kononenko, who arrived at the station earlier this month with NASA astronaut Anne McClain and David Saint-Jacques of the Canadian Space Agency, said in a pre-flight interview that the spacewalk would be a strenuous effort. "It's going to be challenging both physically and technically," he said.

Roscosmos chief Dmitry Rogozin said in September that the hole could have been drilled during manufacture or while in orbit. He didn't say if he suspected any of the crew, but the statement has caused some bewilderment.

Rogozin has since backpedaled on his statement, saying that he never pointed the finger at U.S. astronauts and blaming the media for twisting his statement.

He said recently that the Russian official probe is ongoing and some of the station's crew who are set to come back to Earth on December 20 will take the samples that are collected during the spacewalk. Rogozin added that Roscosmos will discuss the probe findings with NASA and other space station partners. 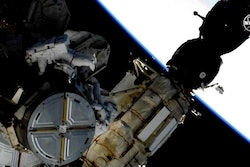