The company allegedly made the 'self-serving' decision to steer the plant's revenues to shareholders.

PPL Corp. filed a complaint Friday in a Delaware court claiming Talen Energy was responsible for any shortage in cash needed to pay environmental cleanups and employee benefits.

The litigation comes after Talen sued PPL in October, claiming PPL took the profits from the $900 million sale of 11 hydroelectric dams when it spun off partial ownership of the plant to Talen.

But PPL says in its lawsuit that at the time of the spinoff, Talen had enough value to cover costs related to operating and cleaning up the plant. PPL says Talen's parent company, Riverstone Holdings, made the "self-serving" decision to steer the plant's revenues to shareholders.

The two companies are headquartered in Allentown, Pennsylvania. 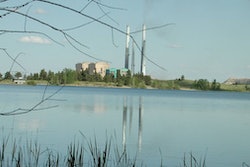