How Old is Cacao? New Research Pushes Back Date

Tests indicate traces of cacao on artifacts from an archaeological site in Ecuador, which is about 1,500 years older than previously thought. 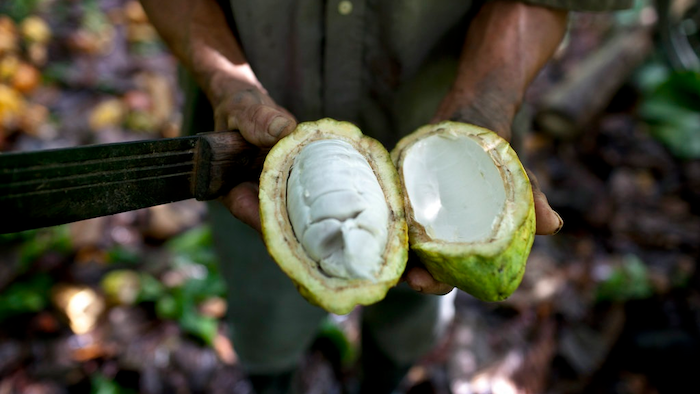 In this Nov. 15, 2012 file photo, a worker shows the inside of a cacao pod at a cacao plantation in Cano Rico, Venezuela. A paper published Monday, Oct. 29, 2018 says tests indicate traces of cacao on artifacts from a South American archeologic site estimated to be 5,400 years old. That makes about 1,500 years older than cacao’s known domestication in Central America.
AP Photo/Ariana Cubillos

Tests indicate traces of cacao on artifacts from an archaeological site in Ecuador, according to a study published Monday. That's about 1,500 years older than cacao's known domestication in Central America.

"It's the earliest site now with domesticated cacao," said Cameron McNeil of Lehman College in New York, who was not involved in the research.

The ancient South American civilization likely didn't use cacao to make chocolate since there's no established history of indigenous populations in the region using it that way, researchers led by the University of British Columbia in Canada said.

But the tests indicate the civilization used the cacao seed, not just the fruity pulp. The seeds are the part of the cacao pod used to make chocolate.

Indigenous populations in the upper Amazon region today use cacao for fermented drinks and juices, and it's probably how it was used thousands of years ago as well, researchers said.

Three types of tests were conducted using artifacts from the Santa Ana-La Florida site in Ecuador. One tested for the presence of theobromine, a key compound in cacao; another tested for preserved particles that help archeologists identify ancient plant use; a third used DNA testing to identify cacao.

How cacao's use spread between South America and Central America is not clear. But by the time Spanish explorers arrived in Central America in the late 1400s, they found people were using it to make hot and cold chocolate drinks with spices, often with a foamy top.

"For most of the modern period, it was a beverage," said Marcy Norton, a historian at the University of Pennsylvania and author of "Sacred Gifts, Profane Pleasures: A History of Tobacco and Chocolate in the Atlantic World."

The chocolate drinks in Central America often contained maize and differ from the hot chocolate sold in the U.S. They did not contain milk, Norton said, and when they were sweetened, it was with honey.

By the 1580s, cacao was being regularly imported into Spain and spread to other European countries with milk being added along the way. It wasn't until the 1800s that manufacturing advances in the Netherlands transformed chocolate into a solid product, Norton said.

Michael Laiskonis, who teaches chocolate classes the Institute of Culinary Education, said he's seeing a growing interest in cacao flavors, indicating a return to a time when chocolate wasn't just an ingredient buried in a candy bar.

He said he tries to incorporate chocolate's past into his classes, including a 1644 recipe that combines Mayan and Aztec versions of drinks with European influences.

"It's something that's always been transforming," he said.