A California buyer backed off of buying the grapes, which are valued at about $4 million. 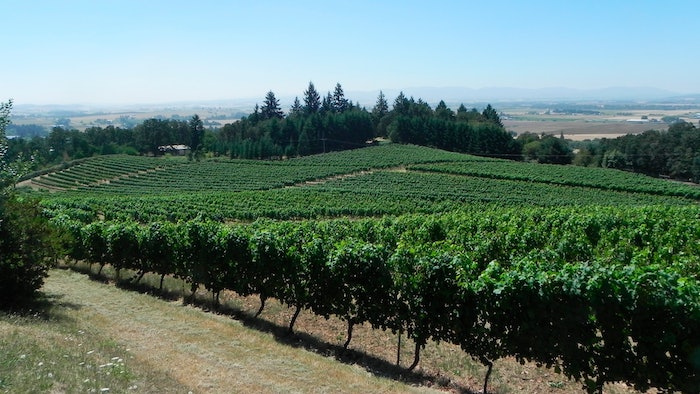 This photo shows vines spilling down toward the Willamette Valley in Amity, Oregon.
AP Photo/Joseph B. Frazier

SALEM, Ore. (AP) — Some Oregon lawmakers and winery owners are scrambling to help a dozen vineyard owners who face the prospect of tons of grapes withering on the vine after a California company abruptly canceled contracts to buy the grapes over fears they are tainted by wildfire smoke.

Copper Cane, based in the Napa Valley, canceled contracts to buy 2,000 tons of grapes just as the annual harvest was getting underway in Oregon. The value of the grapes totals $4 million. If they go unsold, harvesting crews will be out of work, and earnings and profits won't be pumped into the local economy.

The cancellation of the contracts "is perhaps the most devastating issue facing the Oregon wine industry in our history," said Christine Collier Clair, winery director of Willamette Valley Vineyards.

Lab tests carried out so far show wildfire smoke hasn't had an adverse effect on the grapes, Clair said. The vineyard in northwest Oregon is buying some of the crop for its brand that's made from grapes grown in southern Oregon's Rogue Valley wine country, paying the full market price.

Jim Blumling, Copper Cane's vice president of operations, said both lab and sensory tests showed a high level of smoke taint. The most effective time to test is as close as possible to harvest, he added. He said the California company is seeking grapes from elsewhere in Oregon, praising its "reputation for quality and excellence."

"We would not recklessly damage our reputation, erode the image of our brands or that of Oregon's wine growers and vintners by producing a product that does not meet those high standards," Blumling said.

Wildfires cloaked the U.S. West in smoke this summer. It comes as climate change extends the wildfire season and makes blazes bigger and more destructive, worsening air quality and posing problems for businesses.

Ed King, founder of King Estate Winery in Eugene in west-central Oregon, also is buying grapes from the southern Oregon growers and wants other wineries or custom crush facilities with extra capacity to take them in to sell on the bulk wine market.

King Estate, Willamette Valley Vineyards and Silvan Ridge Winery of Eugene are going to jointly make a "Solidarity Vintage" with the grapes, Clair said. "The goal is to save these growers from catastrophe," Clair said.

Rep. David Gomberg was among several dozen people who went to the vineyards in southern Oregon to harvest pinot noir grapes Thursday and draw attention to the crisis. Gomberg, accompanied by state Rep. Gary Leif and Sen. Alan DeBoer, was impressed that Oregon wineries are stepping up to help. "They're saying, 'We're all in this together. We're going to help each other out,'" Gomberg said.

Southern Oregon's economy already had taken a hit from wildfire smoke, which cost the famed Oregon Shakespeare Festival $2 million in revenue. It forced the festival in Ashland to cancel 26 outdoor performances.

Not included in the Oregon Shakespeare Festival's calculations is how much revenue was lost from would-be tourists who normally come from around the world but stayed away because of the smoke this year.

Bird Electrocutions Could Be Causing Wildfires