The project is years behind schedule and billions of dollars over budget. 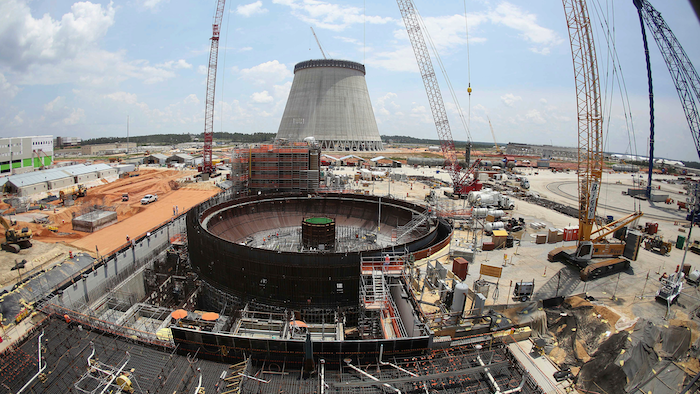 This June 13, 2014, file photo, shows construction on a new nuclear reactor at Plant Vogtle power plant in Waynesboro, Ga. A group of Georgia lawmakers wants a “cost cap” in the construction of a nuclear power plant near Augusta to protect blown budgets from being passed on to consumers. Two reactors being built at Plant Vogtle are billions of dollars over budget.
AP Photo/John Bazemore, File

ATLANTA (AP) — The owners of the last nuclear power plant still under construction in the U.S. say the project will continue after they resolved a disagreement about multibillion-dollar budget overages.

The primary owners, Georgia Power, Oglethorpe Power and the Municipal Electric Authority of Georgia, said in a joint statement late Wednesday that they had come to an agreement that "mitigates financial exposure" in construction of the two new reactors at Plant Vogtle near Waynesboro, Georgia.

The project is years behind schedule and billions of dollars over budget.

"While there have been and will be challenges throughout this process, we remain committed to a constructive relationship with each other and are focused on reducing project risk and fulfilling our commitment to our customers," the owners said in a statement.

The agreement, disclosed in filings with the Securities and Exchange Commission Wednesday, includes cost overage thresholds that, if exceeded, will require Georgia Power to pay a higher share of costs. It also includes a threshold above which the other owners could seek to be bought out by Georgia Power.

The agreement has, for now, saved the plant, which the Department of Energy last week called "a linchpin in the all-of-the-above energy strategy required to sustain our nation's economic strength and energy independence."

The standoff, which pitted Oglethorpe Power against the other owners, began in August when Georgia Power learned that project costs were expected to jump by another $2.3 billion. That triggered a clause in the ownership agreement that requires 90 percent of ownership — all three utilities — to agree to move forward.

Georgia Southern and MEAG each said they were willing to push forward.

But Oglethorpe Power, the lone holdout, said it was only willing to move forward with the project if it received certain concessions, including "several cost-control options" such as a spending cap. The utility said the measures were needed to protect consumers from being gouged on their electricity bills because of project costs.

"Instead of taking a long-term view, Oglethorpe Power is using the vote to try to burden others with its obligations and extract unreasonable concessions," the utility said in a statement.

Oglethorpe Power shot back that it was "exercising our co-owner agreed upon rights, which are well known among all partners, and are not being obstructionists as Georgia Power has claimed."

"We believe we are being common-sense protectionists of our member-consumers, regardless of tremendous business and political pressure because it is simply the right thing to do," Oglethorpe said.

The political pressure exercised on Oglethorpe Power to vote to continue came from several corners.

Georgia Gov. Nathan Deal took to Twitter on Monday and called on the utility to "to reconsider its decision before walking away from 7,000 GA jobs."

The federal government also warned the utilities that any move to cancel the planned expansion would lead to demands for quick repayment of nearly $6 billion in federal loans.

In a letter to the three owners, the Department of Energy said last week that if the construction project is canceled, the government is "prepared to move swiftly to fully enforce its rights under terms of the loan guarantee agreements, including the repayment provisions."

But several state lawmakers had previously sounded the alarm about cost overruns at the site, saying they were in favor of a cost cap to protect ratepayers.

Both Deal and the DOE commended the utilities for voting to continue.

According to Plant Vogtle's owners, one of the new reactors is now scheduled to be operational in 2021 and the other in 2022. They say the new units will "generate enough emission-free electricity to power approximately 500,000 homes and businesses."

Plant Vogtle became the nation's last remaining commercial nuclear plant under construction after the plug was pulled on a similar project in South Carolina in July 2017. The V.C. Summer plant was abandoned after going billions of dollars over budget.