COLUMBUS, Ohio (AP) — A Chicago-based company has announced plans to build what would be Ohio's largest solar power plant.

The Columbus Dispatch reports Hecate Energy is seeking to build a 300-megawatt power plant on 2,500 acres of land near Mowrystown.

The area is located about 90 miles southwest of Columbus and apparently receives the most sun in the state.

It is unclear which utility or company would use the power generated from the plant.

Patti Shorr, Hecate vice president of project development, says the company plans to file an application for the plant with the Ohio Power Siting Board in October.

The board will have nine months after the application is submitted to decide whether to approve it. 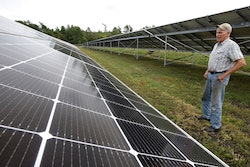