The full order of 20,000 vans, which will be built at a new Mercedes-Benz plant in North Charleston, SC, should be on the road in the next year. 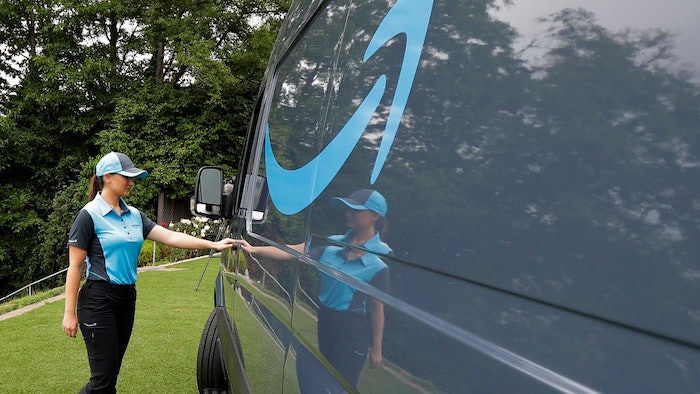 In this June 27, 2018, file photo, Parisa Sadrzadeh, a senior manager of logistics for Amazon.com, opens the door of an Amazon-branded delivery van at the request of a photographer in Seattle, following a media event for Amazon to announce a new program that lets entrepreneurs around the country launch businesses that deliver Amazon packages. Amazon says it has ordered 20,000 vans for its new delivery program. The online retailer says “tens of thousands” of individuals have applied for the program, and it had to up its van order to 20,000 from 4,500.
AP Photo/Ted S. Warren, File

NEW YORK (AP) — Amazon has ordered 20,000 vans for its new delivery program in which contractors around the country can launch businesses that deliver packages for the online retailer.

The company said Wednesday that it increased its van order from 4,500 after it was surprised by the number of applications it received. The vans, which are stamped with Amazon's smile logo in blue, can be used by contractors to deliver packages.

"We have been blown away," said Dave Clark, Amazon's senior vice president of worldwide operations. He said tens of thousands applied, but declined to give a specific number.

The delivery program is part of Amazon's plan to gain more control over how its packages are delivered and rely less on other delivery services, such as UPS, FedEx and the U.S. Postal Service. With these vans on the road, Amazon said more shoppers would be able to track their packages on a map or see a photo of where a package was left when they weren't home.

Charlie O'Shea, the lead retail analyst at Moody's, said the program can help Amazon expand same-day delivery and compete with brick-and-mortar retailers that have order-online-and-pick-up-in-store services. "This is an area where Amazon needs to up its game a little bit," he said.

Amazon has been working on bolstering its delivery network. It has a fleet of cargo planes called "Prime Air," and it also pays people as much as $25 an hour to deliver packages with their cars through Amazon Flex.

For its newer delivery program, Amazon started taking applications in June at its website, logistics.amazon.com. Amazon has said existing package delivery businesses could apply, as well as those with little or no logistics experience.

Clark said Amazon-branded vans are already on the road, and he expects thousands of the vans to be delivering packages by the end of the year. He said the full order of 20,000 vans, which will be built at a new Mercedes-Benz plant in North Charleston, South Carolina, should be on the road in the next year.